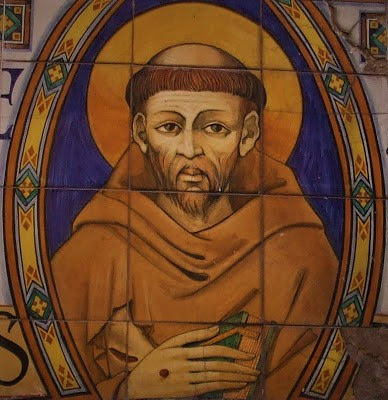 St. Francis of Assisi was baptized with the name Giovanni (John), but his father, who was a cloth merchant and who had lots of business in France, called him Francis. That's the name that stuck, although it's really a nickname. Francis was born in 1182 in the town of Assisi, and because his father was rather successful, Francis was raised with a love of fine clothes and good times. He led the other young men of the town in enjoying good food and drink, singing, and dancing.
When Francis was 20, he was taken prisoner in a war between Assisi and Perugia. For the year he was a prisoner, during which time he was very sick, he had some religious experiences which began to change him. After his release, he was praying in the decrepit little chapel of S. Damiano outside Assisi, and he heard a voice from the crucifix telling him, "Francis, repair my house, which is falling in ruins." He took the words literally, and he went quickly back to the city, sold his horse and some cloth from his father's shop, and came back to give some of the money to the priest at S. Damiano, and distributed some of it to the poor. Francis also, with his own hands, worked on repairing the little church.

His father was furious at Francis' squandering money on churches and beggars, and hauled him before the bishop to bring him to his senses. As he stood before the bishop, Francis calmly took off all his clothes, gave them to his father (the astonished bishop quickly covered Francis with a cloak), and said that he was now recognizing only his Father in heaven, not his father on earth. His life from this time on was lived without money or family ties.

The 13th century was also a time when the Christian religion was taken very much for granted, and Francis felt the need to return to the original spirit of Christ. This meant living in poverty, and it also meant showing Christ's love to other people. A number of the young men of Assisi, attracted by Francis' example, joined him in his new way of life. In 1209 Francis and his companions went to Rome, where they presented their ideas to Pope Innocent III and received his approval.

They found themselves influencing more and more people, including a young lady named Clare, whom Francis helped to enter a monastery of nuns, and who later began the "second order" of Franciscans, the order for women. Francis travelled to the Holy Land. He also went to Rome in 1223 to present the rule of his order to the Pope, who approved it wholeheartedly. Francis returned to Assisi and began to spend more and more time alone in prayer, leaving the decisions about his organization to others.

While he was praying on Mt. Alvernia in 1224, he had a vision of an angelic figure, and when the vision disappeared Francis felt the wounds of Christ in his hands, side, and feet. He was careful not to show the stigmata to others, but several close friends reported after his death that Francis had suffered in his body as Christ had suffered on the cross. His last 2 years were lived in almost constant pain and near-blindness. He died in 1226, and 2 years later he was canonized.

O God, who dost ever delight to reveal thyself to the childlike and lowly of heart: grant that, following the example of blessed Francis, and aided by his prayers; we may count the wisdom of this world as foolishness and know only Jesus Christ and him crucified; who liveth and reigneth with thee, in the unity of the Holy Spirit, ever one God, world without end. Amen.

Posted by Fr. Christopher George Phillips at 9:29 AM