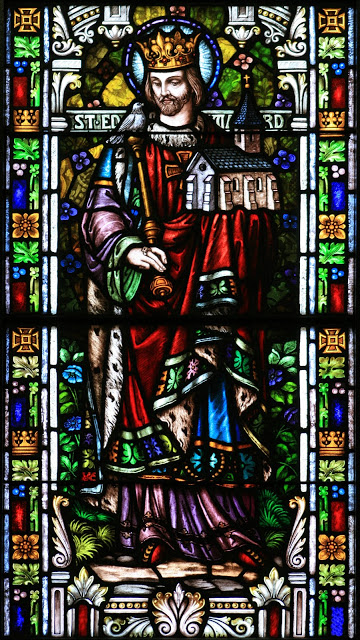 Born about the year 1003, St. Edward was the last Saxon king to rule for any meaningful length of time in England. The Saxons were a Germanic people who had moved into Britain around the 5th century and took over the rule of the people. He is called "Edward the Confessor," which distinguishes him from another King of England, who was his grandfather, St. Edward the Martyr (c. 962-979).
Edward was the son of a very difficult father, known as King Ethelred the Unready. This gives us a hint about Ethelred's temperament – “unready” does not mean that he was unprepared, but rather it means that he was stubborn and willful. "Rede" means “advice” or “counsel,” so “un-rede” indicates that Ethelred was unwilling to take anyone’s advice or counsel.

Ethelred was followed in quick succession by several Danish kings of England, and during that time young Edward and his mother took refuge in Normandy, but the last Danish king decided to name Edward as his successor, and he was crowned in 1042. Some historians consider him to have been a weak king, but that would be to misunderstand him. Edward took his Catholic faith seriously. He always sought to settle things peacefully, and he was concerned for the religious practice of his people. He provided priests and churches throughout his kingdom. His holy example and solid leadership meant that there were more than twenty years of peace and prosperity, with freedom from foreign domination, at a time when powerful neighbors might well have dominated a less capable ruler. He himself was very faithful in public and private worship. He was generous to the poor, and he made himself accessible to his people whenever they had some grievance that needed to be settled.

He had wanted to make a pilgrimage to Rome, but his advisors told him that it would not be good for him to be gone so long out of the country. Accordingly, he spent his pilgrimage money instead on the relief of the poor and the building of Westminster Abbey, which stands today (rebuilt in the thirteenth century) as one of the great churches of England, burial place of her kings and of others who have been deemed worthy of special honor.

He died on 5 January 1066, leaving no children, and he was buried in the great abbey church which he had founded.

O God, who hast crowned thy blessed Confessor King Edward with eternal glory: grant that we who venerate him on earth, may be found worthy to reign with him in heaven; through Jesus Christ thy Son our Lord, who liveth and reigneth with thee, in the unity of the Holy Spirit, ever one God, world without end. Amen.

Posted by Fr. Christopher George Phillips at 9:35 AM