St. Denis and his Companions 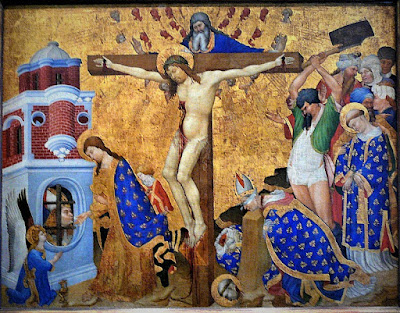 St. Dionysius (Denis, as he is known to us) was born someplace in Italy, sometime during the 3rd century. In fact, for years he was confused with another Dionysius, the Aereopagite who was converted when St. Paul visited Athens. As little as we know about St. Denis, it's evident that he had become known for living a virtuous and faithful life, because he was chosen by Pope Fabian (236-250) to be one of the missionary bishops to Gaul (modern-day France). It was a difficult mission. The Church of Gaul had suffered terribly under the persecution of the Emperor Decius, and these men were sent to do all they could to bring the Catholic faith to the people there. Denis was sent to the area of present-day Paris, along with his companions, the priest Rusticus and the deacon Eleutherius. When they arrived, they settled on an island in the Seine.
It was on this island that Denis built a church, and he and his clergy provided regular worship, with the Daily Offices and the Mass. He was a very powerful preacher, and there were many conversions to the faith. A great number of these converts came from local pagan religions, and when the pagan priests saw so many of their people being baptised, they started to make plans to get rid of the bishop Denis, along with his priest and deacon. They carried out their plan by going to the local Roman governor, Sisinnius, to convince him that what Denis was teaching was actually stirring up the people against the Roman Empire. Sisinnius believed what these pagan priests told him, so he had Denis and his companions arrested. They were told to stop preaching, or they would pay with their lives. Denis and his companions had no intention of stopping, so they were tortured horribly. First, they were scourged and stretched on the rack; finally they were tortured with fire and then thrown to wild beasts. Before they were actually killed by the wild animals, they were dragged away and beheaded, and their bodies thrown into the river. The bodies of the martyrs were retrieved by a holy Christian woman named Catulla. She buried them, and erected a small shrine to mark the graves. Over the years the people came to the site, asking for God's blessings through the intercessions of the three martyrs. Eventually this shrine was expanded and made more beautiful, and today it is a great basilica, one of the most famous churches in Europe. But it still marks the simple graves of these three brave men, who died willingly because of their love for the Lord Jesus Christ.

O God, who didst strengthen blessed Denis, thy Martyr and Bishop, with the virtue of constancy in his suffering, and didst vouchsafe to join unto him Rusticus and Eleutherius, for the preaching of thy glory to the heathen: grant us, we beseech thee, by their example, to despise the prosperity of this world, and to fear none of its adversities; through Jesus Christ thy Son our Lord, who liveth and reigneth with thee, in the unity of the Holy Spirit, ever one God, world without end. Amen.

Posted by Fr. Christopher George Phillips at 11:11 AM