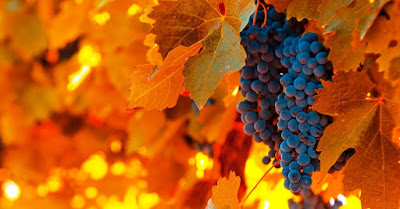 “My beloved had a vineyard on a very fertile hill. He digged it and cleared it of stones, and planted it with choice vines; he built a watchtower in the midst of it, and hewed out a wine vat in it; and he looked for it to yield grapes, but it yielded wild grapes.”

The Holy Scriptures – Old and New Testaments together – give us an account of the relationship between God and His people. We read in the Bible of God’s great love for His children, and we read of the rebellious spirit which causes punishment to come upon them from time to time. It’s the story of our salvation, it’s the story of a people seeking God, trying to love Him, sometimes succeeding, and sometimes failing.

The first reading is a passage from Isaiah’s prophecy (Is. 5:1-7) which had a particularly important place in the religious history of Israel. Isaiah tells a story which is really a tragedy – “My beloved had a vineyard on a very fertile hill...” And so begins the story of the great love which God has for His people, and it sums up the whole drama of the relationship between God and His children. Isaiah is painting a picture using this image of a vineyard planted with choice vines. A watchtower was built in the midst of it. A wine vat was put in it. And then the owner looked for it to yield a good harvest – everything was in place for it to produce good grapes, sweet, and abundant. But all He got from it was wild grapes – small, sour, an unusable crop.

The meaning of Isaiah’s story is so clear. God had chosen a certain people to be the guardians of His promises, and this people was chosen to make God known to the whole world. God intended the Israelite nation to be representatives of His love and tenderness. But rather than producing the good fruits of faithfulness and peace, instead they produced sour fruit – unfaithfulness, jealousy, violence, even hatred. The end result would be their own destruction. The hedge surrounding them would be removed. The walls would be broken down and trampled. It would become a wasteland. It would be choked with weeds, and even the rain would not come upon it any more. This is how Isaiah told the story, through the inspiration of God Himself, as a warning to Israel.

And then, in the Gospel (St. Matthew 21:33-43), we hear the Incarnate God, our Lord Jesus Christ, telling a story – a parable – and what’s it about? A vineyard. And the owner who planted it. He put a hedge around it. He dug a winepress, he built a tower. This story – this image – obviously is important to God, since He tells the story twice. In fact, when our Lord told this already-familiar story to the chief priests and the elders of the Jews, they knew to what He was referring immediately. They knew He was telling them that they were being unfaithful to God. Just as the tenants wanted to make the vineyard into their own, disregarding the fact that it already had an owner, our Lord was telling the Jewish leaders that they were using the law and prophets, not to give glory to God, but rather to bolster their own personal authority, and so were hiding God’s truth and love from others.

And Jesus was being prophetic here. Just as happened in His parable, the chief priests had not only rejected the message of the prophets in the past, but they would also kill the Son – namely, Jesus Himself. And His warning to them was forthright. “The kingdom of God will be taken away from you and given to a nation producing the fruits of it.”

One of the things we know about Christ’s parables is that they have a universal application. Although He was speaking to the chief priests and elders of Israel, His message is for us, too. And it’s a serious message. Namely, that we are to listen to God’s truth as it comes to us through those who are appointed to bring it – and the source of the truth is Jesus Christ Himself. We are to use what our Lord has revealed to us to produce the fruits of the vineyard. We’re to use it to build up God’s kingdom, and to spread the good news of His love and salvation to the whole world.

This was what Israel had been chosen to do, and now we – as the New Israel – have been chosen for the same task. We are to devote our minds and our wills and our energy to the building up of God’s kingdom, and not looking for any return for ourselves. The job we have is pretty simple in its outline, but it’s not easy. Too often we fall into a selfish practice of our faith: “God, I want...God, I need...God please do this for me...” It’s an ancient temptation. We see it through the prophecies of Isaiah and the other great prophets; we see it in the chief priests and elders of the Jews to whom our Lord was speaking. It’s the temptation to try a fashion the Kingdom of God as our own personal domain, focusing our attention on what we want, on what we feel is important. We sometimes try, like the unworthy tenants in today’s Gospel, to take the Lord’s vineyard for ourselves, serving ourselves under the guise of serving the truth.

How do we become faithful tenants of God’s vineyard? St. Paul gives us some guidance in his epistle to the Philippians (4:6-9). “Whatever is true, whatever is honorable, whatever is just, whatever is pure, whatever is lovely, whatever is gracious, if there is any excellence, if there is anything worthy of praise, think about these things...” We should think: are those the ingredients in my conversations? Do people read those things in my own heart? And also he tells us, “in everything by prayer and supplication with thanksgiving let your requests be made know to God.” This is the “bottom line” – that we have to seek out those things that are of God, and those things only, and act upon them, making them the basis of our prayer to God. There’s no room for selfishness in God’s kingdom. There’s no room for personal gain in God’s kingdom. There’s no room for “picking and choosing” in God’s kingdom. There’s but one thing for us to do: to put ourselves in God’s care, and His care alone, so that He can plant His kingdom in us. And when we allow God to plant His Word in us – with all of the grace which flows from the Sacraments and from our life of prayer – He’ll have a great harvest. It’ll be a harvest of salvation for the world, the harvest of a people who want to serve God and His truth by living in accordance with His Will. This is the harvest that can fix broken lives, and that can heal broken families, and that can renew broken hearts.

Are things not as we hoped they would be in our own lives? The answer to that is for us to live in sync with God’s revealed truth. This is the paradox of the Gospel: that we’re free to be all that we should be, only when we’re obedient to God. It’s in obedience that we find freedom. We can have new life only insofar as our old lives of selfishness and self-centeredness are put aside. We’re not the owners of this vineyard; we are tenants. One of the fundamental spiritual mistakes we make is to think that we own the world. We are tenants, entrusted with the responsibility of caring for it, but everything that we have, everything we are, is on loan, and if we put ourselves at the center, we put our tenancy in jeopardy. So this is the great question for us today: "how am I using the gifts that God gave me for God's purposes? My money? My time? My talents? My creativity? My relationships?" It all has to be for God.

So may we unite ourselves so completely with Christ that His death will bring us life, and that the creatures of bread and wine, transubstantiated at the Mass, might make us into a new creation; namely, men and women who desire only to love and serve the Lord.

Lord, we pray thee that thy grace may always precede and follow us: and make us continually to be given to all good works; through Jesus Christ thy Son our Lord, who liveth and reigneth with thee, in the unity of the Holy Spirit, ever one God, world without end. Amen.

Posted by Fr. Christopher George Phillips at 11:47 AM