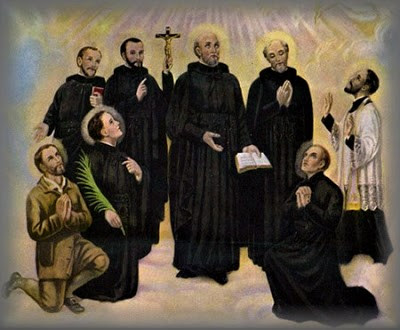 There are eight men whom we know as the Martyrs of North America (known also as the Canadian Martyrs), and they worked in the area of upstate New York and neighbouring Canada. St. Isaac Jogues and his companions were the first martyrs of the North American continent officially recognized by the Church. Isaac Jogues was a man of learning and culture, and he taught literature in France. He gave up that career to work amongst the Huron Indians in the New World, and in 1636 he and his companions, under the leadership of St. John de Brébeuf, arrived in Quebec. The Hurons were constantly being attacked by the Iroquois, and in a few years Father Jogues was captured by the Iroquois and imprisoned for 13 months. His letters and journals tell how he and his companions were led from village to village, how they were beaten, tortured and forced to watch as their Huron converts were mangled and killed.
An unexpected chance for escape came to Isaac Jogues through the Dutch, and he returned to France, bearing the marks of his sufferings. Several fingers had been cut, chewed or burnt off. Pope Urban VIII gave him permission to offer Mass with his mutilated hands, saying "It would be shameful that a martyr of Christ be not allowed to drink the Blood of Christ." Welcomed home as a hero, Father Jogues could have retired, thanked God for his safe return, and died peacefully in his homeland. But his zeal led him back once more to the fulfillment of his vocation to this missionary work. In a few months he sailed for his missions among the Hurons.

In 1646 he and Jean de Lalande, who had offered his services to the missioners, set out for Iroquois country, thinking that a recently signed peace treaty would be observed. They were captured by a Mohawk war party, and on October 18 Father Jogues was tomahawked and beheaded. Jean de Lalande was killed the next day at a village near Albany, New York.

The first of the Jesuit missionaries to be martyred was René Goupil who, with Lalande, had offered his services as an oblate. He was tortured along with Isaac Jogues in 1642, and was tomahawked for having made the Sign of the Cross on the brow of some children.

Jean de Brébeuf was a French Jesuit who came to Canada at the age of 32 and laboured there for 24 years. He went back to France when the English captured Quebec (1629) and expelled the Jesuits, but returned to his missions four years later. Although medicine men blamed the Jesuits for a smallpox epidemic among the Hurons, Jean remained with them. He composed catechisms and a dictionary in Huron, and saw 7,000 converted before his death. He was captured by the Iroquois and died after four hours of extreme torture.

Father Anthony Daniel, Brother Gabriel Lalemant, Father Charles Garnier, and Father Noel Chabanel, were tortured and killed at different times, but all for the same reason – their love for God, their love for the Indians as God’s children, and their desire to bring them the love of God through life in the Church.

O God, who amongst the peoples of North America didst hallow the first-fruits of the Faith both in the preaching and in the blood of many holy Martyrs: graciously grant by the intercession of Saints Jean de Brébeuf, Isaac Jogues and Companions; that everywhere from day to day the harvest of souls may abound to the increase of thy faithful people; through Jesus Christ thy Son our Lord, who liveth and reigneth with thee, in the unity of the Holy Spirit, ever one God, world without end. Amen.