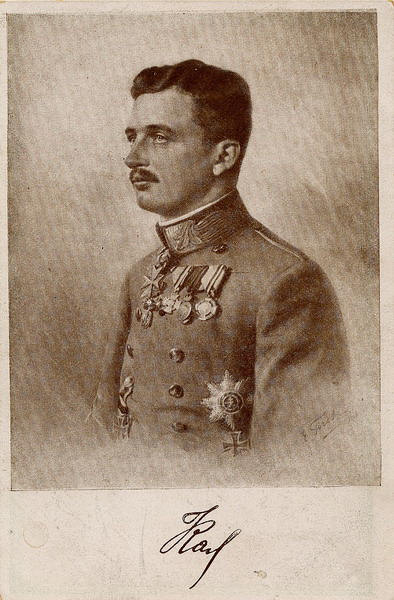 Blessed Charles of Austria was a remarkable man – someone who was at the very center of 20th century history, but who treasured his Catholic faith above all else. He was born in 1887 to Archduke Otto and Princess Maria Josephine of Saxony. The Emperor of Austria, Emperor Franz Joseph I was Blessed Charles' Great Uncle. Charles was given an excellent Catholic education, and he developed a deep devotion to the Holy Eucharist and to the Sacred Heart of Jesus. He was raised in such a way that he would always turn to prayer before making any important decisions. In 1911 he married Princess Zita of Bourbon and Parma. The couple was blessed with eight children during the ten years of their happy and exemplary married life.

In 1914, an event happened that affected the whole world. The man who was the heir to the Emperor, Archduke Franz Ferdinand, was assassinated, which was a trigger for the First World War. This assassination meant that very unexpectedly, Blessed Charles became heir to the throne of the Austro-Hungarian Empire. World War I was underway and in 1916, the Emperor Franz Joseph died. Blessed Charles became Emperor of Austria, and he was crowned on December 30th as the apostolic King of Hungary. Blessed Charles took his position as King very seriously, and he understood it as a way for him to follow Christ more closely – he would do that through the love and care of the peoples over whom he ruled, and he dedicated his life to caring for the people of his kingdom.

He also considered most sacred the duty of a king to be committed to peace. If a ruler couldn’t provide a peaceful life for his people, then Blessed Charles considered that to be a failure in ruling a kingdom justly. With the terrible First World War raging around him, he was the only political leader to give his support to the peace efforts of the reigning Pope, Benedict XV.

In his own kingdom, even though there was widespread suffering because of the war, Blessed Charles began reforming the social legislation, basing it completely on Catholic social teaching and justice. In spite of his efforts, and his deep love for his people, when the war was over there was an effort by some to banish him from his country, and that’s exactly what happened. He had done the right thing, but there were those who were stronger than he was, who hated him for his goodness, and they wanted him to abdicate his position.

Because he considered his duty as king to be something mandated by God, he refused to abdicate, and Blessed Charles was exiled to the island of Madeira. He and his family were reduced to a life of poverty, and they ended up living in a very poor house in very unhealthy conditions. He became seriously ill, but he accepted this as a sacrifice for the peace and unity of his people. Blessed Charles suffered terribly during his final sickness, but endured it without complaining. He forgave all those who had conspired against him and he died on April 1st 1922 with his eyes turned toward the Blessed Sacrament, giving adoration to God with his final breath.

In his homily at the beatification of Blessed Charles on October 3, 2004, Pope St. John Paul II said,


The decisive task of Christians consists in seeking, recognizing and following God's will in all things. The Christian statesman, Charles of Austria , confronted this challenge every day. To his eyes, war appeared as "something appalling". Amid the tumult of the First World War, he strove to promote the peace initiative of my Predecessor, Benedict XV.

From the beginning, the Emperor Charles conceived of his office as a holy service to his people. His chief concern was to follow the Christian vocation to holiness also in his political actions. For this reason, his thoughts turned to social assistance. May he be an example for all of us, especially for those who have political responsibilities in Europe today!


O God, who didst call thy servant Blessed Charles of Austria to an earthly throne that he might advance thy heavenly kingdom, and didst give him zeal for thy Church and love for thy people: Mercifully grant that we who commemorate him this day may be fruitful in good works, and attain to the glorious crown of thy saints; through Jesus Christ our Lord, who liveth and reigneth with thee and the Holy Spirit, one God, for ever and ever. Amen.
Posted by Fr. Christopher George Phillips at 6:17 PM