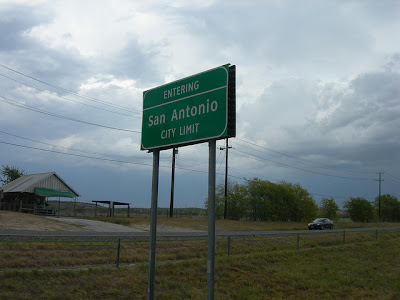 Thirty-six years ago this week my family and I were on a journey unlike any we had ever been on before. It was on January 17th that we arrived in San Antonio from Rhode Island. We had driven for almost five days, having left New England in the midst of a near-blizzard.

As we were about to begin the road trip, I took our rather decrepit Volkswagen to a mechanic, and when I asked him if we’d make it to Texas his reply was, “Hell, Mister, I don’t think you’ll make it out of town!” We did, though. We arrived with our (then) three very young children, our dog and a hamster, along with whatever supplies we could pack in around them.

On the day we left Rhode Island I was removed from the clerical ranks of the Episcopal diocese – officially deposed by the Episcopal bishop, George Hunt. My salary was terminated, we were immediately stricken from all diocesan insurance policies, and even my small pension plan had been confiscated. As we approached San Antonio, we were entering the unknown. I wasn't sure even how to start a new work in the untested Pastoral Provision of Pope John Paul II, and I had no sense of a vocation to be a pioneer. Of course, God had a plan. It would have been nice at the time to have known what it was, but I suppose He wanted us to learn to walk in faith, which we did.

Looking back, those were some tough days. Fortunately, I was (and still am) blessed with a wife who understood as I did, that God had called us to become Catholics and to cooperate with Him in establishing the parish of Our Lady of the Atonement. And it was fortunate, too, that she was able to create a meal out of next to nothing, since in those early years we had an extremely small amount of money to live on, especially with three young children. But as difficult as those times were, they were exciting, too. We were doing something worthy, something that hadn't been done before. Big challenges led to little victories, as we worked and waited for a year an a half in the hope that the Holy Father would grant my petition and allow my ordination to the Sacred Priesthood. Happily, he did.

A lot of memories can get packed into thirty-six years, but of all of them perhaps the most vivid is when we caught sight of the sign that said "Entering San Antonio." Actually, it probably should have said, "Entering the most exciting and blessed time of your life!"
Posted by Fr. Christopher George Phillips at 9:52 PM