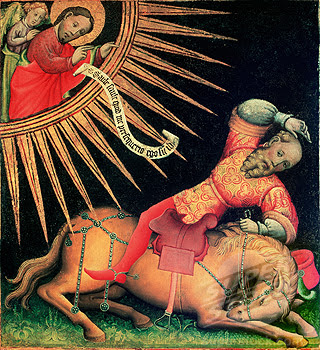 St. Paul was a Jew of the tribe of Benjamin, and was born in Tarsus, the capitol of Cilicia. Although he was a Roman citizen, he was brought up as a strict Jew, studied to be a rabbi, and later became a violent persecutor of the Christians. While on his way to Damascus to arrest the Christians there, he was suddenly converted by a miraculous apparition of Our Lord. He became the great Apostle of the Gentiles, making three missionary journeys which brought him to the great centers of Asia Minor and southern Europe, making many converts as he travelled. He was beheaded in Rome in 66, and his relics are kept in the Basilica of St. Paul near the Ostian Way.

O God, who, through the preaching of the blessed Apostle Paul, hast caused the light of the Gospel to shine throughout the world: grant, we beseech thee; that we, having his wonderful conversion in remembrance, may show forth our thankfulness unto thee for the same, by following the holy doctrine which he taught; through Jesus Christ thy Son our Lord, who liveth and reigneth with thee, in the unity of the Holy Spirit, ever one God, world without end. Amen.