St. Thérèse of the Child Jesus 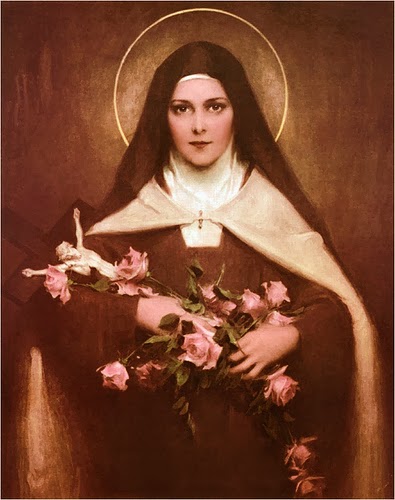 Marie Thérèse Martin was born into a family of very faithful Catholics, and she was the youngest of five daughters. Her father was a watchmaker, and her mother, Zelie, who died when Thérèse was four, was a lace maker.

While still a child she felt the attraction of the cloister, and at fifteen obtained permission to enter the Carmel of Lisieux, taking the name of Sr. Thérèse of the Child Jesus and the Holy Face. For the next nine years she lived a very ordinary religious life. There are no miracles or exceptional experiences recorded about her. She attained a very high degree of holiness simply by carrying out her ordinary daily duties with perfect faithfulness, having a childlike confidence in God's providence and merciful love and by being ready to be at the service of others at all times. She also had a great love of the Church and a zeal for the conversion of souls, and she prayed especially for priests.

She died of tuberculosis on September 30, 1897, at the age of 24, and was canonized in 1925. She has never ceased to fulfill her promise: "I will pass my heaven in doing good on earth." Her interior life is known through her autobiography called The Story of a Soul. Pope St. John Paul II declared her to be a Doctor of the Church in 1997.

O Lord Jesus Christ, who hast said, except ye become as little children ye shall not enter into the kingdom of heaven: grant us, we beseech thee, in meekness and lowliness of heart to follow the footsteps of blessed Thérèse thy Virgin; and so at last to come unto thine everlasting kingdom; who livest and reignest with the Father in the unity of the Holy Spirit, ever one God, world without end. Amen.


On a personal note, with the Commemoration of St. Thérèse of the Child Jesus - the Little Flower - come remembrances of occasions when she has sent a rose into someone's life at just the right time.

My own experience was several years ago, during a time of great trial, when I very much needed a sign of God's love and something which would indicate I was acting in accordance with His Divine Will. It was at about 4:45 a.m., when I was walking from my car to offer Mass at the Carmelite convent where I was chaplain. It was a winter morning, and the temperature was near freezing. I had been asking St. Thérèse and the Blessed Mother for their intercession. Just before opening the gate to the convent I looked down, and on the sidewalk was a fresh rose with some drops of water on the petals. When I got inside I asked the nuns if they had been bringing roses in from someplace, but they assured me that they hadn't. I took it as a sign of God's love, sent by the Little Flower, and it was all I needed at that important time.
Posted by Fr. Christopher George Phillips at 5:11 PM