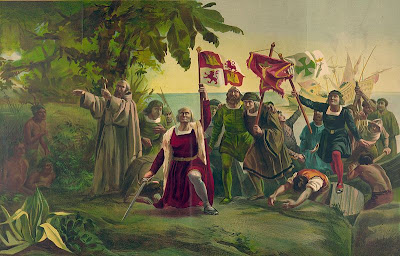 The second Monday in October is observed as Columbus Day – the anniversary of the day in 1492 when Christopher Columbus and his men first sighted land in their amazing voyage across the ocean from Europe. Some people try to paint a very black picture of Columbus, and you might hear or read things that make him and his motives look very bad – all for the cause of political correctness. But the truth is, Columbus had two reasons and two reasons only for this adventure: one practical, and one spiritual.

Spain had just ejected the Muslims who had overrun huge parts of Europe, and these invaders had ravaged places like Spain, and had made it very poor. So one of the reasons for the voyage was to find another trade route to the Far East, where they hoped to find sources of revenue to rebuild what the Muslims had destroyed; but the other reason – the purpose closest to the heart of Columbus – was to bring the Catholic Faith to the native people in this new world, people who were living in the darkness of paganism.

So on August 2nd 1492 the three ships – the Niña, the Pinta , and the Santa Maria, carrying 120 men, set sail from the shores of Spain. Christopher Columbus was an experienced sailor, having served on ships from the time he was a boy. He was raised in the Catholic Faith, and always took the practice of his faith very seriously. When he received the inspiration for this voyage, he tried to convince the King of Portugal to sponsor him, but with no success. So he set off for Spain, spending years trying to convince King Ferdinand and Queen Isabella to support him, which he finally did, with the help of a holy Franciscan priest, Fr. Juan Perez. In fact, it was this priest who would eventually celebrate the first Mass in America on the Feast of the Immaculate Conception, and that is a reason our nation is dedicated to the Immaculate Conception, which is commemorated by our national basilica in Washington, D.C.

Christopher Columbus also convinced the Pope, Alexander VI, to help with the cost of the voyage, because this was to be a great missionary journey. Columbus wrote to the Pope: “I trust that by God’s help, I may spread the Holy Name and Gospel of Jesus Christ as widely as possible.” It was a very difficult voyage. The men began to loose hope. Two months passed, and there was still no land to be seen. The crew grew restless and insisted that their captain turn back. But Columbus was certain that God was guiding them, and he told them that if no land was seen by the time of the Feast of Our Lady of the Pillar, October 12th, he would do as they wanted. The men agreed, and land was sighted, on the very day of the great Feast of Our Lady.

The first act by Columbus upon setting foot on this new land was to set up the Cross and claim it in the Name of Jesus Christ. He named the first island he arrived at “San Salvador” (Holy Savior). In all, Christopher Columbus led four excursions from the shores of Spain to America. He maintained his deep faith, even when things were difficult – and whatever his detractors might say, he accomplished what he set out to do – he brought the Catholic Faith to these new and distant lands, so that those living in darkness would know the Light of Christ. Indeed, his adventures paved the way for missionaries to continue the great work of taking the Catholic Faith to every part of the world.
Posted by Fr. Christopher George Phillips at 7:21 AM