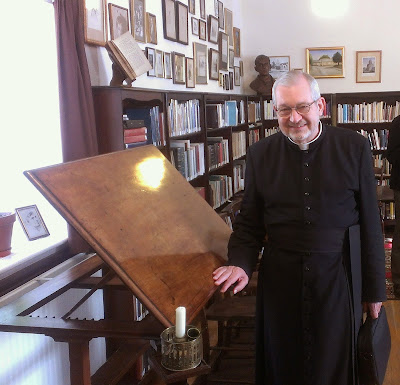 It has been said that Bl. John Henry Newman "wrote himself into the Church." If there is any truth in that, then it took place on this desk, where he wrote his Essay on the Development of Christian Doctrine. It was 1845, and he had been at Littlemore for the previous few years. He was undergoing spiritual suffering, and he was eating so little that he was described as "ghostly thin." He stood at this desk to write, the writing surface adjusted to be at a slight slope, and by the time he finished the work he knew he would enter the Catholic Church.

Is it possible to know something of the man simply from a piece of furniture? Objectively speaking, perhaps not; but I cannot deny the overwhelming sense of Newman's journey as I laid my hand on the surface of the desk where his own hand had laboured, and where his heart searched out and found its home.

He never again used this desk as a place to write. He said he could not, knowing that it had been used for so great a Mystery as the Mass.
Posted by Fr. Christopher George Phillips at 5:09 PM