A Path Into Full Communion 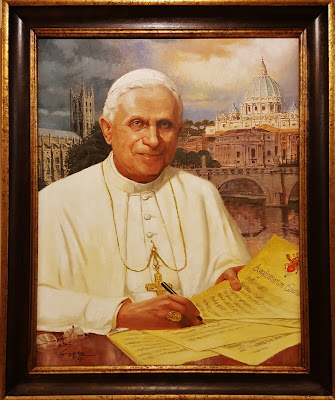 Each year we receive a number of Anglicans and other Protestants of various denominations into the full communion of the Catholic Church through our parish. In fact, there are several receiving instruction through our Inquirers Class right now.

Every once in a while I’ll hear from clergy from one of the several local Anglican communities. Sometimes they’re interested in exploring the possibility of becoming Catholic; more often they’re interested in debating. Obviously they don’t want to lose people from their communities, so I don’t blame them for trying to make their case. Some of them see no need to “become Catholics” because they’re quite certain they already have everything necessary for being Catholic. They would entertain the idea of “being in communion with Rome,” as long as it didn’t involve having to believe what the Roman Catholic Church teaches. In fact, they would hold that those Anglicans who intend to become Roman Catholics have sold their souls – to what or to whom, I’m not certain – and words like “capitulation” and “submission” are used fairly often.

I always tell them that I agree with them on that point. Becoming a Catholic does require capitulation and submission – to God, that is. It was, after all, God’s idea that the Church be one. It was God’s idea that St. Peter should be the Rock on which His Church would be founded. It was God who said, “This is my Body,” and “This is the chalice of my Blood.” It’s all there in the Gospel, from the mouth of the Lord Jesus Himself, so why wouldn’t we take those statements as true and want to accept them? In fact, it was God’s idea that the Blessed Virgin Mary should be preserved from the stain of original sin so that the flesh He took would be unblemished by sin. And since sin results in death, it’s logical that she who was conceived in the extraordinary situation of original purity should not undergo the ordinary circumstances of death. Likewise, it was God who said that those whom He had joined together, “let not man put asunder.” He also said, “Thou shalt do no murder,” and surely He intended the commandment to be applied to the innocent unborn. These things, and more, are part of the revealed Catholic faith. Who wouldn’t want to submit to such obvious truths?

And I have to ask those who warn against capitulation and submission to these and other matters of faith: what are they offering? Some “pure” form of Anglicanism? Catholicism divorced from the Petrine office established by Christ? A pick-and-choose form of Christianity tailor-made for personal tastes? Actually, that doesn't seem to be working out so well. Pride doesn’t make for a stable foundation, and the private judgement of what’s true doesn’t make very reliable glue.

Archbishop Michael Ramsey wrote of the “incomplete” nature of Anglicanism. In 1989, then-Archbishop Robert Runcie was addressing the North American Conference of Cathedral Deans when he said, “Our vocation as Anglicans is to put ourselves out of business.” Entering into full Catholic communion through the Ordinariate isn’t so much a matter of going out of business; rather, it’s moving the best treasures to a safe location, where the roof doesn’t leak and the walls aren’t crumbling, and where God may be worshipped in the beauty of holiness.
Posted by Fr. Christopher George Phillips at 11:50 AM