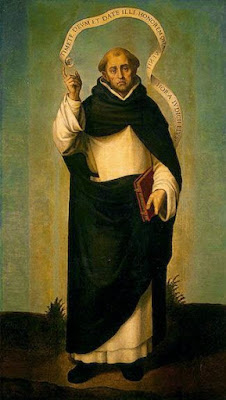 St. Vincent Ferrer is the patron saint of builders because of his fame for "building up" and strengthening the Church, through his preaching, missionary work, in his teachings, as confessor and adviser. Born in 1357, when he was eighteen years old he entered the Order of St. Dominic. He was a brilliant student, and soon after his profession he was commissioned to deliver lectures on philosophy while continuing his studies, and eventually he received his doctorate, all the while growing in his spiritual life. In 1390, he entered the service of Cardinal Pedro de Luna, and this developed into a very difficult situation, because this was the time when a claim was made by Cardinal de Luna that he was the legitimate pope. St. Vincent felt a loyalty to his friend the Cardinal, but he realized that truth was more important than mere human friendship, and he felt obliged to go against his friend.

He then began those labors that made him the most famous missionary of the fourteenth century. He evangelized nearly every province of Spain, and preached in France, Italy, Germany, Flanders, England, Scotland, and Ireland. Many conversions followed his preaching, which God Himself assisted by the gift of miracles. Though the Church was then divided by the great schism, the saint was honorably received in the districts subject to the two claimants to the Papacy. He was even went to Granada, which was under the rule of Islam, and he preached the gospel with much success. He lived to see the end of the great schism and the election of Pope Martin V. Finally, having given his life to the preaching of the Faith, he died April 5, 1419.

O God, who didst vouchsafe to illumine thy Church by the merits and preaching of blessed Vincent thy Confessor: grant to us thy servants; that we may both be instructed by his example, and by his advocacy be delivered from all adversities; through Jesus Christ thy Son our Lord, who liveth and reigneth with thee, in the unity of the Holy Spirit, ever one God, world without end. Amen.

Posted by Fr. Christopher George Phillips at 8:36 AM