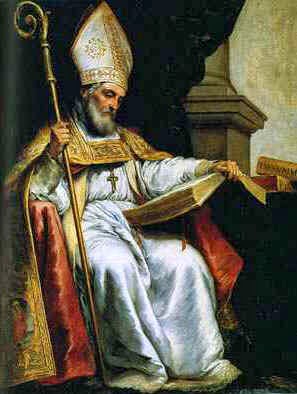 St. Isidore of Seville was born into a family of saints in Spain in the sixth century. Two of his brothers, Leander and Fulgentius, and one of his sisters, Florentina, are revered as saints in Spain. His two brothers served as bishops and his sister was an abbess.

But it’s not always easy to live with saints. In fact, although Isidore’s brother Leander is venerated as a saint today, the way he treated his younger brother Isidore was shocking, even to people who lived at that time. Leander, who was much older than Isidore, took over Isidore's education and Leander’s idea of education involved force and and lots of punishment. We know from Isidore's later accomplishments that he was very intelligent and hard-working, so it’s difficult to understand why Leander thought abuse would work instead of patience. One day, the young Isidore couldn't take any more. He was frustrated by his inability to learn as fast as his brother wanted him to, and he was hurt by his brother's treatment, so Isidore ran away. As he stopped to rest, he noticed water dripping on a rock near where he sat. He noticed that the small drops of water that were falling weren’t very forceful, and seemed to have no effect on the solid stone. And yet he saw that over time, the water drops had worn holes in the rock.

He took this as an important lesson. Isidore realized that if he kept working at his studies, bit by bit his small efforts would eventually pay off in great learning. He also wanted his brother Leander to see that he was really trying, so he went back. When he returned home, his brother wasn’t any more understanding or any more kind than he had ever been, and in fact Leander sent Isidore off to a monastery where he was confined to a cell so he wouldn’t run away again, and there he was to continue his studies.

Either there must have been a loving side to this fraternal relationship, or Isidore was remarkably forgiving even for a saint, because later he would work side by side with his brother and after Leander's death, Isidore took his place as the bishop of Seville, and would complete many of the projects his brother had started.

In a time where everybody wants to blame the past hurts for their present problems, Isidore didn’t fall into that trap. He was able to separate the abusive way he was taught from the joy of learning. He didn't run from learning after he left his brother but embraced education and made it his life's work. Isidore rose above his past to become known as the greatest teacher in Spain.

His love of learning made him promote the establishment of a seminary in every diocese of Spain. He didn't limit his own studies, nor did he want limitations on others. In a unique move, he made sure that all branches of knowledge including the arts and medicine were taught in the seminaries.

His encyclopedia of knowledge, the Etymologies, was a popular textbook for nine centuries. He also wrote books on grammar, astronomy, geography, history, and biography as well as theology. In fact, the great breadth of Isidore’s learning meant that Pope John Paul II named him Patron of the Internet.

He lived until almost 80. As he was dying his house was filled with crowds of poor to whom he was giving aid and alms. One of his last acts was to give all his possessions to the poor. When he died in 636, this Doctor of the Church had done more than his brother had ever hoped; the light of his learning caught fire in Spanish minds and held back barbarism from Spain. But even greater than his outstanding mind must have been the genius of his heart that allowed him to see beyond rejection and discouragement to joy and possibility.

O God, by whose providence blessed Isidore was sent to guide thy people in the way of everlasting salvation: grant, we beseech thee; that as we have learned of him the doctrine of life on earth, so we may be found worthy to have him for our advocate in heaven; through Jesus Christ thy Son our Lord, who liveth and reigneth with thee, in the unity of the Holy Spirit, ever one God, world without end. Amen.