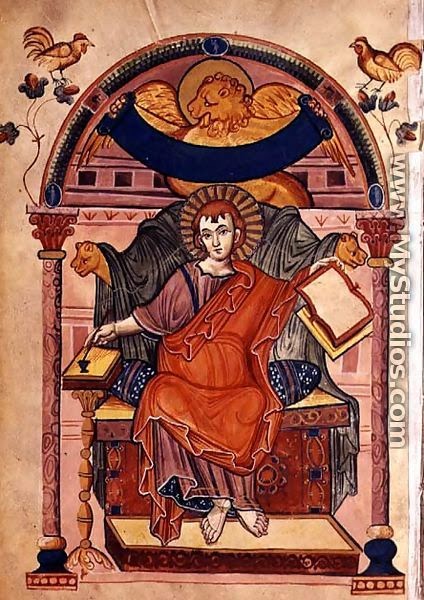 Excerpted from "The Church's Year of Grace" by Pius Parsch:


John Mark, later known simply as Mark, was a Jew by birth. He was the son of that Mary who was proprietress of the Cenacle or "upper room" which served as the meeting place for the first Christians in Jerusalem (Acts 12:12). He was still a youth at the time of the Savior's death. In his description of the young man who was present when Jesus was seized and who fled from the rabble leaving behind his "linen cloth," the second Evangelist might possibly have stamped the mark of his own identity.

During the years that followed, the rapidly maturing youth witnessed the growth of the infant Church in his mother's Upper Room and became acquainted with its traditions. This knowledge he put to excellent use when compiling his Gospel. Later, we find Mark acting as a companion to his cousin Barnabas and Saul on their return journey to Antioch and on their first missionary journey. But Mark was too immature for the hardships of this type of work and therefore left them at Perge in Pamphylia to return home.

As the two apostles were preparing for their second missionary journey, Barnabas wanted to take his cousin with him. Paul, however, objected. Thereupon the two cousins undertook a missionary journey to Cyprus. Time healed the strained relations between Paul and Mark, and during the former's first Roman captivity (61-63), Mark rendered Paul valuable service (Col. 4:10; Philem. 24), and the Apostle learned to appreciate him. When in chains the second time Paul requested Mark's presence (2 Tim. 4:11).

An intimate friendship existed between Mark and Peter; he played the role of Peter's companion, disciple, and interpreter. According to the common patristic opinion, Mark was present at Peter's preaching in Rome and wrote his Gospel under the influence of the prince of the apostles. This explains why incidents which involve Peter are described with telling detail (e.g., the great day at Capharnaum, 1:14f)). Little is known of Mark's later life. It is certain that he died a martyr's death as bishop of Alexandria in Egypt. His relics were transferred from Alexandria to Venice, where a worthy tomb was erected in St. Mark's Cathedral.

The Gospel of St. Mark, the shortest of the four, is, above all, a Roman Gospel. It originated in Rome and is addressed to Roman, or shall we say, to Western Christianity. Another high merit is its chronological presentation of the life of Christ. For we should be deeply interested in the historical sequence of the events in our blessed Savior's life.

Furthermore, Mark was a skilled painter of word pictures. With one stroke he frequently enhances a familiar scene, shedding upon it new light. His Gospel is the "Gospel of Peter," for he wrote it under the direction and with the aid of the prince of the apostles. "The Evangelist Mark is represented as a lion because he begins his Gospel in the wilderness, `The voice of one crying in the desert: Make ready the way of the Lord,' or because he presents the Lord as the unconquered King."


O Almighty God, who hast instructed thy holy Church with the heavenly doctrine of thy Evangelist Saint Mark: give us grace; that, being not like children carried away with every blast of vain doctrine, we may be established in the truth of thy holy Gospel; through Jesus Christ thy Son our Lord, who liveth and reigneth with thee, in the unity of the Holy Spirit, ever one God, world without end. Amen.
Posted by Fr. Christopher George Phillips at 5:28 PM