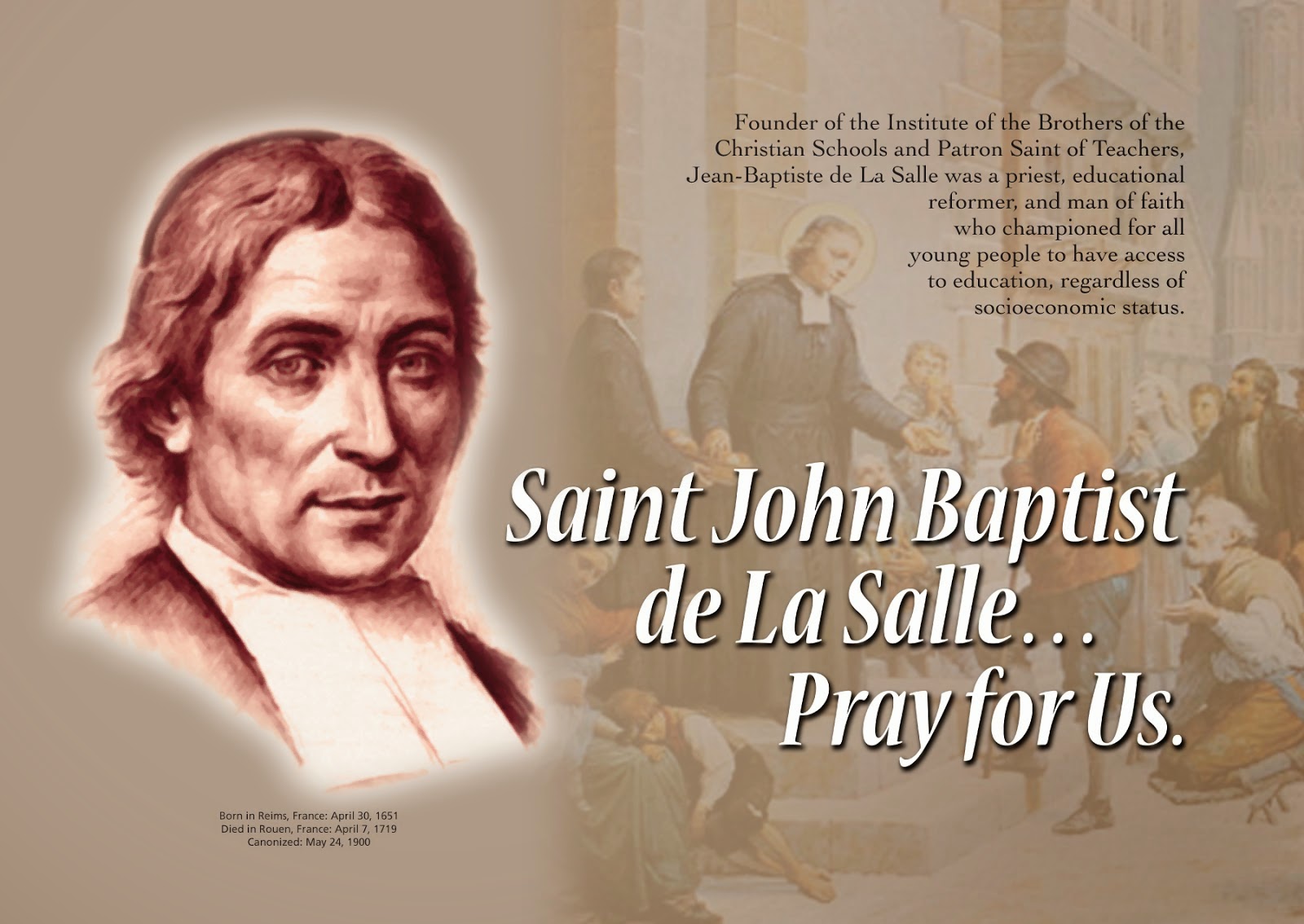 St. John Baptist de La Salle was born at Rheims in 1651, became a member of the cathedral chapter at Rheims when he was sixteen, and was ordained a priest in 1678. Soon after ordination he was put in charge of a girls' school, and in 1679 he met Adrian Nyel, a layman who wanted to open a school for boys. Two schools were started, and Canon de la Salle became interested in the work of education. He took an interest in the teachers, eventually invited them to live in his own house, and tried to train them in the educational system that was forming in his mind. This first group ultimately left, unable to grasp what the saint had in mind; others, however, joined him, and the beginnings of the Brothers of the Christian Schools were begun.

Seeing a unique opportunity for good, Canon de La Salle resigned his canonry, gave his inheritance to the poor, and began to organize his teachers into a religious congregation. Soon, boys from his schools began to ask for admission to the Brothers, and the founder set up a juniorate to prepare them for their life as religious teachers. At the request of many pastors, he also set up a training school for teachers, first at Rheims, then at Paris, and finally at St.-Denis. Realizing that he was breaking entirely new ground in the education of the young, John Baptist de la Salle wrote books on his system of education, opened schools for tradesmen, and even founded a school for the nobility, at the request of King James of England.

The congregation had a tumultuous history, and the setbacks that the founder had to face were many; but the work was begun, and he guided it with rare wisdom. In Lent of 1719, he grew weak, met with a serious accident, and died on Good Friday. He was canonized by Pope Leo XIII in 1900, and Pope Pius XII proclaimed him patron of schoolteachers.

Excerpted from The One Year Book of Saints, Rev. Clifford Stevens

O God, who for the Christian education of the poor, and for the confirmation of the young in the way of truth, didst raise up the holy Confessor John Baptist de la Salle, and through him didst gather a new family in the Church: graciously grant that by his intercession and example we, being kindled with zeal for thy glory in the salvation of souls, may be enabled to be made partakers of his crown in heaven; through Jesus Christ thy Son our Lord, who liveth and reigneth with thee, in the unity of the Holy Spirit, ever one God, world without end. Amen.