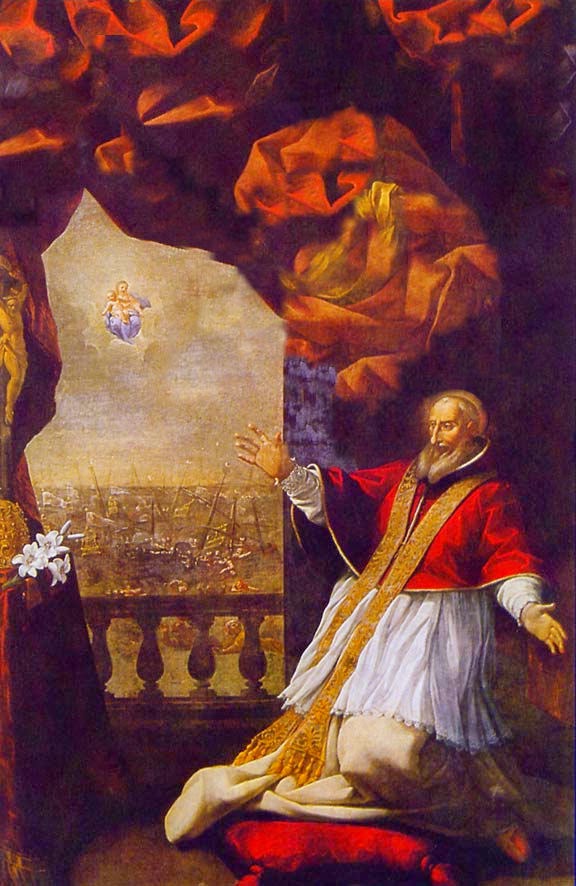 Pope St. Pius V -- Michael Ghislieri -- was born into a poor family on 17 January 1504.  He spent his childhood working as a shepherd, until he entered the Dominican Order at the age of fourteen.  His keen intelligence served well, and eventually he was ordained as a bishop, ultimately occupying the Throne of St. Peter.

St. Pius V lived in times much like our own.  The Council of Trent took place during his lifetime, and as is the case with most Councils, there was a time of confusion following.  He spent much of his life -- before his time as pope, and then until his death -- working to implement the principles of the Council, and strengthening the witness of the Catholic Church.

A very important event took place on October 7, 1571.  It is associated with Our Lady, and also with Pope St. Pius V.

For some time the Muslims had attempted to conquer Europe, not only for political reasons, but also in an attempt to destroy the Church and impose Islam throughout the known world.

On that clear October morning a huge gathering of ships appeared in the Mediterranean Sea, near the Greek port of Lepanto -- 280 Turkish ships, and 212 Christian ships. For years the Muslims had been raiding Christian areas around the Mediterranean and had carried off thousands of Christians into slavery. In fact, all of the ships gathered on that morning were powered by rowers – and the Muslim ships had nearly 15,000 Christian slaves in chains, being forced to pull the oars to guide the ships into battle. The Catholic fleet was under the command of Don Juan of Austria, but the Catholic fleet was at a great disadvantage in its power and military ability. This was a battle that would decide the fate of the world – either the Turks would be victorious and the Church destroyed, or the Catholics would be victorious and would put down the Muslim threat.

Pope St. Pius V knew the importance of victory. He called upon all of Europe to pray the rosary, asking for the intercession of Our Lady, that God would grant a Catholic victory. Although it seemed hopeless, the people prayed. Don Juan guided his battleships into the middle of the Turkish fleet; meanwhile, many of the Christian slaves had managed to escape their chains and poured out of the holds of the Muslim ships, attacking the Turks and swinging their chains, throwing the Muslims overboard. The combination of the attack by the Catholic fleet and the uprising of the Christian slaves meant that there was a great victory by the Catholics fleet over the mighty Turkish fleet.

We know today that this victory was decisive. It prevented the Islamic invasion of Europe at that time, and it showed the Hand of God working through Our Lady. At the hour of victory, St. Pope Pius V, who was hundreds of miles away in his Papal residence, is said to have gotten up from a meeting, went over to a window, and through supernatural knowledge exclaimed, "The Christian fleet is victorious!" and he wept tears of thanksgiving to God.

This day has been remembered throughout the Church, first as Our Lady of Victory, and then as Our Lady of the Holy Rosary – remembering the victory God granted, and also remembering the means by which that victory was achieved – that it was an intervention by God through the prayers offered by praying the Rosary... perhaps something we might consider in our own generation.


O God, who, for the overthrow of the enemies of thy Church and for the restoring of divine worship, wast pleased to choose blessed Pius to be Supreme Pontiff: grant that we may be defended by his protection, and so cleave to thy service; that overcoming the devices of all our enemies, we may rejoice in perpetual peace; through Jesus Christ thy Son our Lord, who liveth and reigneth with thee, in the unity of the Holy Spirit, ever one God, world without end. Amen.