One of my favourite places... 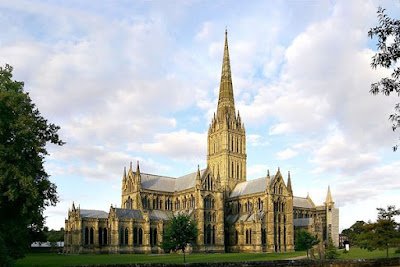 One of my very favourite places is the Cathedral Church of the Blessed Virgin Mary in Salisbury, Wiltshire. Built in the 13th century as a magnificent Catholic cathedral, it was "repurposed" as an Anglican cathedral during that unfortunate time. We lived in the shadow (literally) of the cathedral for two years while I was studying at Salisbury & Wells Theological College, back in the early 1970's. Our flat was on the third floor of the Archdeaconry, and our windows looked at out the full north side of this magnificent pile of stone.

During the summers, I used to give tours of the Cathedral -- probably to the disappointment of the American tourists. I'm sure they wanted someone with a posh accent to be showing them around. Instead, they got a farmer's kid from Connecticut. Oh well, I'm sure my love for the place came through nonetheless. Also, I had the privilege of substituting for the great organist, Richard Seale, from time to time. Talk about feeling powerful, when the fabulous Father Willis organ was cranked up to its capacity! This was also the place where I served as an Anglican deacon for the first time, so it has that sweet memory for me, too.

It's probably most famous for having the tallest spire in England (404 feet), and its remarkable architectural unity is due to the fact that it was built in a relatively short time. It was begun in 1220, and completed (except for the spire) in 1258.

It certainly would be nice to have it back some day...
Posted by Fr. Christopher George Phillips at 6:34 PM