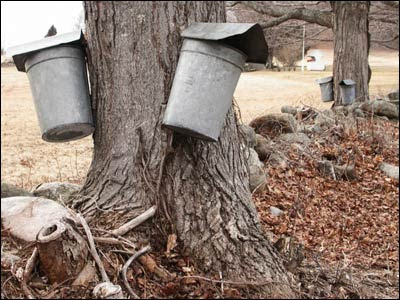 For some reason I felt nostalgic today, and I remembered the sugaring seasons of my boyhood back on the farm in Connecticut. Why I remembered, I cannot say. Maybe it's something programmed into my memory through the generations of Yankee blood flowing through my veins. But this is the season, usually in the February/March time-frame, although it can begin earlier and end later, depending on the conditions.  As I recall, freezing temperature overnight, rising to 40 degrees or so in the day make excellent conditions for the sap to run.


I was first taught how to gather sap by my grandfather, Warren Wheeler Jones, when I was very young, probably only five or six years old. Grandpa was very tall and very quiet, and to me one of the more interesting things about him was that he had a wooden leg. He'd been in a tragic hay-mowing accident when he was a young boy. It didn't slow him down, though. He loved the outdoors, and it was Grandpa who taught me all sorts of things; how to fish a trout stream, how to get a team of oxen to do what you want it to do, how to find the best wild mushrooms, how to use a hand scythe to cut hay... and how to tap sugar maple trees and boil the sap down into the best maple syrup in the world.


By the time I was eleven or twelve, I had quite a circuit of maple trees I was tapping. The season was never long -- sometimes only a few weeks, sometimes more -- but I used to love the adventure of following the trail I had mapped out through the woods, having found the best maple trees myself, and working with nature for the annual running of the sap. I'd take an old hand drill with me, along with the spouts which would be used to gather the sap. Some people used store-bought metal spouts, but I liked to make my own. There was a shrub (I can't remember what it was called) from which excellent natural spouts could be made. I'd cut a branch into six inch lengths, and the center was rather soft and could be pushed out, to make a hollow tube. I'd carefully whittle down the end to fit into the holes which I would drill into the trees, and voilà! -- a perfect sap spout. I'd hang a small bucket under each spout, and the sound of the "drip-drip-drip" was music to a young boy's ears.


I'd have to empty the sap pails daily, and sometimes twice daily. I made a simple neck-yoke which allowed me to carry two fairly large buckets along the collection trail, and back out of the woods. It was important to start to boil it right away, because the sap could turn sour if you didn't get right down to business. I had a large pan, broader than it was deep, and I'd get this positioned over an outdoor fire. It seemed almost like magic to see the clear sap turn slightly caramel-color, and then darker and darker until it was syrup. Whatever patience I have today, it was probably learned during the maple syrup season, since it takes something approaching forty gallons of sap to make one gallon of syrup. That's a lot of carrying and a lot of boiling, but it certainly did make those pancakes and waffles taste good.


Ok, the nostalgia warning is over. There's no deep message here, except for the old-fashioned warmth of happy memories and the ever-present wonders of God's creation.
Posted by Fr. Christopher George Phillips at 8:47 AM