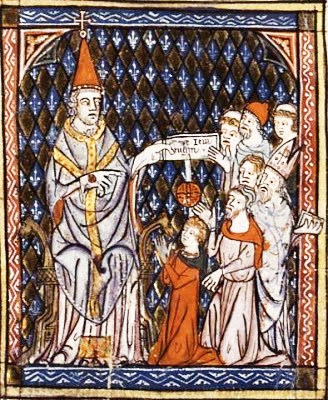 Imagine if what anybody knew about you was information that came from someone who really didn’t like you at all. And imagine if there was the added difficulty that the person who didn’t like you was also a saint! That’s the situation with St. Callistus who lived at the end of the 2nd century and into the 3rd century – most of the information about him comes from his enemy St. Hippolytus, who at first was kind of a troublemaker in the early Church, but who later, just like St. Callistus, became a martyr for the Faith.

Callistus was a slave in the imperial Roman household. He was an educated slave, and because of his financial talent, he was put in charge of a bank by his master. Unfortunately, because he made some loans to people who didn’t pay them back, he lost almost all the money that had been deposited. Callistus panicked, and he ran away. Of course, he was eventually caught and was put in jail. After being imprisoned for a while, his master released him and told him to do everything he could to recover the money. Apparently Callistus got a little too carried away, and eventually he was arrested again because he had started a fight in a local synagogue when he went after someone there who hadn’t paid back a loan. This time he was condemned to work in the mines of Sardinia, which usually was a death sentence because of the horrible conditions there. But through the intervention of an influential person who had pity on him, he even managed to be released from the terrible life in the Sardinian mines. So far, it doesn’t sound much like the life of a saint, does it?

After he won his freedom, he was put in charge of the place where Christians buried their departed loved ones – this cemetery was called a catacomb, and in fact this cemetery was the first land actually owned by the Church, and it still exists as the Catacomb of St. Callistus. He was so faithful in this work that the pope ordained him as a deacon, and Callistus became his trusted friend and adviser.

Callistus had such a changed life and had become so faithful that he was himself elected pope, and it was then that the rivalry between Callistus and Hippolytus became so bitter – in fact, Hippolytus himself wanted to be the pope because he didn’t agree with many of the decisions made by Callistus. This rivalry was healed eventually, however, and Hippolytus was eventually martyred, and these two former enemies are now saints together in heaven. St. Callistus was martyred in Rome during one of the persecutions of the Church in the 3rd century.

O God, who didst raise up Pope Saint Callistus to serve the Church and attend devoutly to Christ’s faithful departed: strengthen us, we pray, by his witness to the faith; so that, rescued from the slavery of corruption, we may merit an incorruptible inheritance; through Jesus Christ thy Son our Lord, who liveth and reigneth with thee, in the unity of the Holy Spirit, ever one God, world without end. Amen.