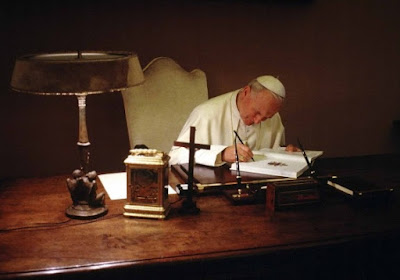 As we celebrate the Feast of Pope St. John Paul II it should be recognized by all who benefit from the establishment of the three existing Ordinariates that in him they have a pioneer and a heavenly patron. His place should be acknowledged. While it is true to say that these jurisdictions were the creation of Pope (now Emeritus) Benedict XVI, it was St. John Paul II who first made a place for the Anglican Patrimony in the Catholic Church, and by his action the possibility of what we know as the Ordinariates was made clear.

In the Decree issued by the Congregation for the Doctrine of the Faith, dated July 22, 1980 (Prot. N. 66/77), regarding the care of the reconciled lay Faithful and speaking of the structure of what was called the "Common Identity" of the Pastoral Provision, it is stated that "the preference expressed by the majority of the Episcopal Conference for the insertion of these reconciled Episcopalians into the diocesan structures under the jurisdiction of local Ordinaries is recognized." There was no juridical reason to go further. However, it did. An important sentence immediately followed in the Decree: "Nevertheless, the possibility of some other type of structure as provided for by canonical dispositions, and as suited to the needs of the group, is not excluded."

With that statement the spade began turning the soil, preparing the ground for Anglicanorum Coetibus. The important place St. John Paul II has occupied in all this from the very beginning should not be forgotten.

History is clear. St. John Paul II was the first to give our Anglican Patrimony an honoured place in the Church, and it was his own trusted and beloved successor who brought to fruition "the possibility of some other type of structure..."


[Go to this link to read my daily Facebook posts.]