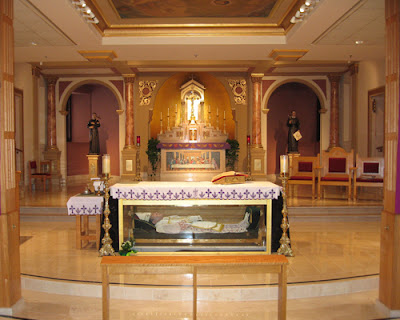 This American saint was born in Bohemia, which today is within the Czech Republic, in 1811. He completed his seminary formation, and was looking forward to being ordained in 1835, when his bishop decided there would be no more ordinations. It is difficult for us to imagine now, but Bohemia had more priests than they needed. John wrote to bishops all over Europe but the story was the same everywhere: no one wanted any more priests. He was sure he was called to be a priest but all the doors to follow that vocation seemed to close in his face.

But John didn't give up. He had learned English by working in a factory with English-speaking workers, so he wrote to the bishops in America. Finally, the bishop in New York agreed to ordain him. So John left his homeland, and sailed to America, knowing he would probably never return to his home again.

In New York, Fr John Neumann was one of 36 priests for 200,000 Catholics. His parish in western New York stretched from Lake Ontario to Pennsylvania. He spent most of his time traveling from village to village, climbing mountains to visit the sick, staying with different families, or in taverns and inns along the way, finding places to teach the Faith, and celebrating the Mass at kitchen tables.

Because of the work and the isolation of his parish, the young priest felt the need to be part of a community, and so he joined the Redemptorists, a congregation of priests and brothers dedicated to helping the poor and most abandoned.

He had a great ability to learn languages, and he was able to learn Spanish, French, Italian, and Dutch, so that he could hear confessions in at least six languages. When Irish immigration started, he learned Gaelic so well that one Irish woman remarked, "Isn't it grand that we have an Irish bishop!"

He spent all his energy on being a great bishop to his people, and he lived very simply. He was only forty-eight years old when he died. He is buried in Philadelphia, in St. Peter’s Church, where pilgrims venerate his tomb and ask for his prayers.

O God, our heavenly Father, who didst raise up thy faithful servant St. John Neumann to be a bishop in thy Church and to feed thy flock: Give abundantly to all pastors the gifts of thy Holy Spirit, that they may minister in thy household as true servants of Christ and stewards of thy divine mysteries; through the same Jesus Christ our Lord, who liveth and reigneth with thee and the same Spirit, one God, for ever and ever. Amen.

Posted by Fr. Christopher George Phillips at 7:58 AM