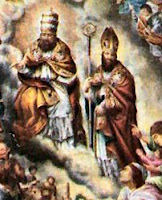 Rome had been without a bishop for about a year because of the persecution of the Emperor Decius. Cornelius was elected Bishop of Rome in 251. Although it was a time of persecution, that wasn’t the biggest problem he had to face. Divisions in the Church had been taking place, stemming from the argument about whether or not the Church could forgive a person’s very serious sins – for instance, if someone had turned away from their faith, but then wanted to return to the Church, the question was whether the Church could give forgiveness and take that person back. A fairly popular priest during that time named Novatian was against the practice of giving forgiveness. He claimed that the Church had no power to pardon those who had lapsed during time of persecution. The same applied to cases of murder, and other serious sins. In fact, Novatian felt so strongly about this that he set himself up as a rival pope.

However, St. Cornelius, with the strong support of St. Cyprian, the bishop of Carthage in North Africa, insisted that the Church did have the power to forgive apostates and other sinners, and that they could be re-admitted to Holy Communion after having performed an appropriate period of penance. Some letters of Cornelius to Cyprian together with Cyprian’s replies have survived.

A synod of Western bishops in Rome in October 251 upheld Cornelius, condemned the teachings of Novatian, and excommunicated him and his followers. When persecutions of the Christians started up again in 253 under Emperor Gallus, Cornelius was exiled and he died as a martyr.

His great friend and supporter, St. Cyprian was from a very wealthy pagan background, but he became a Christian, and was known as a great orator. After his baptism he distributed most of his wealth to the poor, and was eventually ordained as a priest, and then became the bishop of the city where he had grown up, Carthage. Just as Pope Cornelius faced persecution, so did Cyprian. He was a strong defender of the teaching of Cornelius, and even though they lived a continent apart, after they were both martyred, they were always linked together in the mind of the Church as having stood up for the mercy of God, and His desire to forgive the sins of those who repented.


O Almighty God, by whose grace and power thy holy martyrs St. Cornelius and St. Cyprian triumphed over suffering and were faithful even unto death: Grant us, who now remember them with thanksgiving, to be so faithful in our witness to thee in this world, that we may receive with them the crown of life; through Jesus Christ our Lord, who liveth and reigneth with thee and the Holy Spirit, one God, for ever and ever. Amen.