A return of the Old Faith 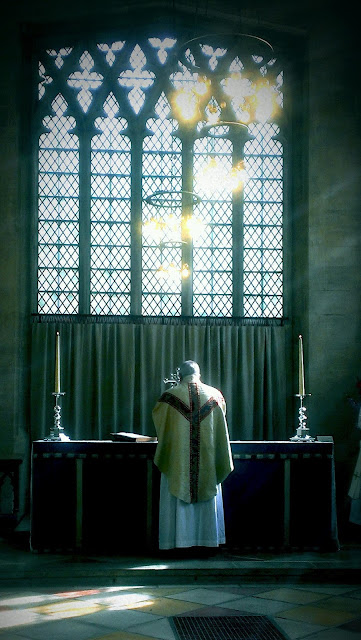 We arrived in Bury St. Edmunds and went directly to the Anglican Cathedral of St. James, where we were welcomed as though we were long-lost family. They had expressed the hope that we would celebrate our pilgrimage Mass there, which we did. The sacristan had prepared the Lady Chapel for our use, vestments were laid out, the chalice and ciborium were in place. The verger asked if he could ring the tower bell at the consecration, and I told him no doubt our Lord would be delighted!

And so a Catholic Mass was once more offered on this site of the ancient abbey which was once a great pilgrimage site protecting the relics of St. Edmund. The abbey is no more, and this Anglican cathedral stands in one of its former chapels, but we felt the grace of once more offering the Holy Sacrifice of the Mass where it had been offered countless times before...a return of the Old Faith.
Posted by Fr. Christopher George Phillips at 3:27 PM