A Martyr of Charity 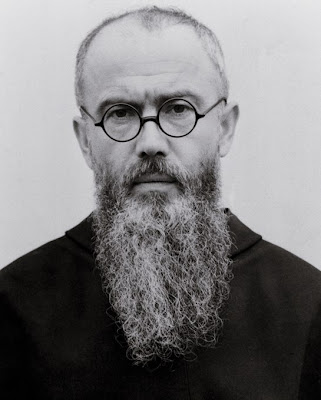 On August 14th we commemorate a very brave priest who gave his life for his faith in that terrible and dark place, Auschwitz. St. Maximilian Kolbe was born in Poland in 1894, and when he was sixteen he entered the Franciscan Order. He was sent to study in Rome where he was ordained a priest in 1918.

Maximilian returned to Poland in 1919 and began spreading the Gospel and devotion to the Blessed Virgin, whom he called the “Immaculata.” He founded a religious community of Franciscans to do this work, and by 1939 it had expanded from just eighteen friars, to 650 all living in one place, making it the largest Catholic religious house in the world.

To spread the Gospel and devotion to the Immaculata, St. Maximillian used the most modern printing equipment, and he not only published catechetical and devotional tracts, but also a daily newspaper with a circulation of almost a quarter of a million, and a monthly magazine with a circulation of over one million. He started a radio station and planned to build a Catholic movie studio--he was a true "apostle of the mass media."

In 1939 Nazis invaded his homeland of Poland, and his religious house was severely bombed. He and his friars were arrested, although they were released in less than three months, on the feast of the Immaculate Conception. But in 1941 he was arrested again. The Nazis wanted to get rid of anyone who could be considered a leader, and St. Maximilian was taken to the internment camp in Auschwitz. He was there for three months before he was killed, after undergoing terrible beatings and humiliations.

The circumstances of his martyrdom were these: a prisoner had escaped. The commandant announced that ten men would die. He was an especially cruel man, and as he walked through the ranks of the prisoners he would say “This one. That one,” as he pointed. As they were being marched away to the starvation bunkers, St. Maximilian, who was only known as Number 16670, stepped from the line. Maximilian pointed to one of the prisoners who had been chosen to die. “I would like to take that man’s place. He has a wife and children.” “Who are you?” “A priest.” He gave no name, even though he was one of the best-known priests in all of Poland. There was silence for a moment, and then the commandant, wanting to show his power of life and death over the prisoners, removed the condemned man out of line and ordered St. Maximilian to go with the other nine. They were taken to the “block of death.” They were ordered to strip naked and they were locked in a building where their slow starvation began in complete darkness. But there was no screaming — instead, the prisoners sang hymns together. By the eve of the Assumption, only four were left alive. The jailer came to finish them off, and St. Maximilian was in a corner praying. He lifted his fleshless arm for the needle, which was filled with carbolic acid. They burned his body with all the others. He was beatified in 1971 and in 1982 Blessed John Paul II canonized Maximilian as a "martyr of charity," because, out of his love for Christ, he had laid down his life for another.

O ALMIGHTY God, who hast called us to faith in thee, and hast compassed us about with so great a cloud of witnesses; Grant that we, encouraged by the good example of thy holy martyr St. Maximilian Kolbe, and aided by his intercession, may persevere in running the race that is set before us, until at length, through thy mercy, we with him attain to thine eternal joy; through him who is the author and finisher of our faith, thy Son Jesus Christ our Lord. Amen.