Eyewitness to a martyrdom... 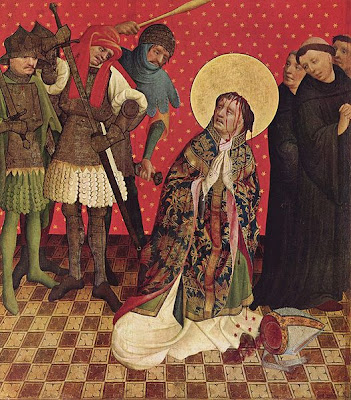 The murderers of St. Thomas Becket entered Canterbury Cathedral on 29 December 1170.  They called out for the archbishop, and finding him, they came at him with their swords.  When one of the swords was brandished at the head of Thomas, a young cleric named Edward Grim reached out to protect the archbishop.  As the sword came down, Edward's arm was severed.  He survived, however, and left this account of that terrible day.


After the monks took [Thomas] through the doors of the church, the four aforementioned knights followed behind with a rapid pace. A certain subdeacon, Hugh the Evil-clerk, named for his wicked offense and armed with their malice, went with them - showing no reverence for either God or the saints because by following them he condoned their deed. When the holy archbishop entered the cathedral the monks who were glorifying God abandoned vespers - which they had begun to celebrate for God - and ran to their father whom they had heard was dead but they saw alive and unharmed. They hastened to close the doors of the church in order to bar the enemies from slaughtering the bishop, but the wondrous athlete turned toward them and ordered that the doors be opened. "It is not proper," he said, "that a house of prayer, a church of Christ, be made a fortress since although it is not shut up, it serves as a fortification for his people; we will triumph over the enemy through suffering rather than by fighting - and we come to suffer, not to resist." Without delay the sacrilegious men entered the house of peace and reconciliation with swords drawn; indeed the sight alone as well as the rattle of arms inflicted not a small amount of horror on those who watched. And those knights who approached the confused and disordered people who had been observing vespers but, by now, had run toward the lethal spectacle exclaimed in a rage: "Where is Thomas Becket, traitor of the king and kingdom?" No one responded and instantly they cried out more loudly, "Where is the archbishop?" Unshaken he replied to this voice as it is written, "The righteous will be like a bold lion and free from fear," he descended from the steps to which he had been taken by the monks who were fearful of the knights and said in an adequately audible voice, "Here I am, not a traitor of the king but a priest; why do you seek me?" And [Thomas], who had previously told them that he had no fear of them added, "Here I am ready to suffer in the name of He who redeemed me with His blood; God forbid that I should flee on account of your swords or that I should depart from righteousness." With these words - at the foot of a pillar - he turned to the right. On one side was the altar of the blessed mother of God, on the other the altar of the holy confessor Benedict - through whose example and prayers he had been crucified to the world and his lusts; he endured whatever the murderers did to him with such constancy of the soul that he seemed as if he were not of flesh. The murderers pursued him and asked, "Absolve and restore to communion those you have excommunicated and return to office those who have been suspended." To these words [Thomas] replied, "No penance has been made, so I will not absolve them." "Then you," they said, "will now die and will suffer what you have earned." "And I," he said, "am prepared to die for my Lord, so that in my blood the church will attain liberty and peace; but in the name of Almighty God I forbid that you hurt my men, either cleric or layman, in any way." The glorious martyr acted conscientiously with foresight for his men and prudently on his own behalf, so that no one near him would be hurt as he hastened toward Christ. It was fitting that the soldier of the Lord and the martyr of the Savior adhered to His words when he was sought by the impious, "If it is me you seek, let them leave."

With rapid motion they laid sacrilegious hands on him, handling and dragging him roughly outside of the walls of the church so that there they would slay him or carry him from there as a prisoner, as they later confessed. But when it was not possible to easily move him from the column, he bravely pushed one [of the knights] who was pursuing and drawing near to him; he called him a panderer saying, "Don't touch me, Rainaldus, you who owes me faith and obedience, you who foolishly follow your accomplices." On account of the rebuff the knight was suddenly set on fire with a terrible rage and, wielding a sword against the sacred crown said, "I don't owe faith or obedience to you that is in opposition to the fealty I owe my lord king." The invincible martyr - seeing that the hour which would bring the end to his miserable mortal life was at hand and already promised by God to be the next to receive the crown of immortality - with his neck bent as if he were in prayer and with his joined hands elevated above - commended himself and the cause of the Church to God, St. Mary, and the blessed martyr St. Denis.

He had barely finished speaking when the impious knight, fearing that [Thomas] would be saved by the people and escape alive, suddenly set upon him and, shaving off the summit of his crown which the sacred chrism consecrated to God, he wounded the sacrificial lamb of God in the head; the lower arm of the writer was cut by the same blow. Indeed [the writer] stood firmly with the holy archbishop, holding him in his arms - while all the clerics and monks fled - until the one he had raised in opposition to the blow was severed. Behold the simplicity of the dove, behold the wisdom of the serpent in this martyr who presented his body to the killers so that he might keep his head, in other words his soul and the church, safe; nor would he devise a trick or a snare against the slayers of the flesh so that he might preserve himself because it was better that he be free from this nature! O worthy shepherd who so boldly set himself against the attacks of wolves so that the sheep might not be torn to pieces! and because he abandoned the world, the world - wanting to overpower him - unknowingly elevated him. Then, with another blow received on the head, he remained firm. But with the third the stricken martyr bent his knees and elbows, offering himself as a living sacrifice, saying in a low voice, "For the name of Jesus and the protection of the church I am ready to embrace death." But the third knight inflicted a grave wound on the fallen one; with this blow he shattered the sword on the stone and his crown, which was large, separated from his head so that the blood turned white from the brain yet no less did the brain turn red from the blood; it purpled the appearance of the church with the colors of the lily and the rose, the colors of the Virgin and Mother and the life and death of the confessor and martyr. The fourth knight drove away those who were gathering so that the others could finish the murder more freely and boldly. The fifth - not a knight but a cleric who entered with the knights - so that a fifth blow might not be spared him who had imitated Christ in other things, placed his foot on the neck of the holy priest and precious martyr and (it is horrible to say) scattered the brains with the blood across the floor, exclaiming to the rest, "We can leave this place, knights, he will not get up again."

But during all these incredible things the martyr displayed the virtue of perseverance. Neither his hand nor clothes indicated that he had opposed a murderer - as is often the case in human weakness; nor when stricken did he utter a word, nor did he let out a cry or a sigh, or a sign signaling any kind of pain; instead he held still the head that he had bent toward the unsheathed swords. As his body - which had been mingled with blood and brain - laid on the ground as if in prayer, he placed his soul in Abraham's bosom. Having risen above himself, without doubt, out of love for the Creator and wholly striving for celestial sweetness, he easily received whatever pain, whatever malice, the bloody murderer was able to inflict. And how intrepidly - how devotedly and courageously - he offered himself for the murder when it was made clear that for his salvation and faith this martyr should fight for the protection of others so that the affairs of the church might be managed according to its paternal traditions and decrees.


Below: the site of the martyrdom of St. Thomas Becket. 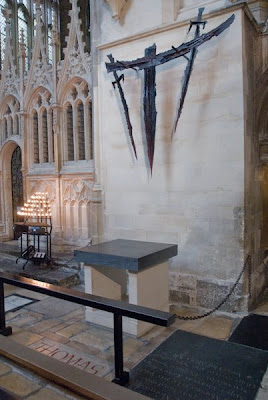