I guess you had to be there... 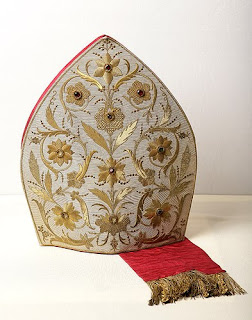 Picture it.  A group of Episcopalians gathers to elect their next bishop.  They're all together the night before, ostensibly for the purpose of praying for guidance.  It comes time for a reading from Scripture, and... well, let's go to the incident as it's recounted in an article by David Virtue, which he's posted on his website, VirtueOnline:


A cradle Episcopalian and parishioner at St. Matthew's Episcopal Church in Portland found herself mocked and ridiculed for reading a portion of Scripture relating to the qualifications for bishop on the eve of electing a new diocesan bishop.

Margaret Enriques was invited by her rector, the Rev. David L. Humphrey, to read 1Timothy 3:1-7 (NRSV), a passage relating to the qualifications for bishop. She promptly agreed. During the Opening Eucharist, she approached the lectern, announced the Lesson and began to read. When the second sentence was read, people began to laugh. Soon the sound of laughter became so great that she stopped and waited until it died down. Then she continued, but soon the laughter returned and grew so loud that she had to stop again and wait until she could be heard. Finally, she finished the reading.

"The laughter began when I started to read 'a bishop should not be a lover of money' and again later during the reading," she told VOL.

A few minutes later, in the introduction to his sermon, the Rt. Rev. Jerry Lamb (appointed in 2008 to administer the Episcopal Diocese of San Joaquin) joked: "I'd like to have a word with whoever it was who picked those readings." The bishop did not make good his threat, Enriques told VOL.

Asked about her ordeal, Enriques said she was shocked and deeply saddened by what had happened, but it was not enough to make her leave The Episcopal Church.


Following is the text of 1 Timothy 3:1-7 (NRSV). "The saying is sure: whoever aspires to the office of bishop desires a noble task. Now a bishop must be above reproach, married only once, temperate, sensible, respectable, hospitable, an apt teacher, not a drunkard, not violent but gentle, not quarrelsome, and not a lover of money. He must manage his own household well, keeping his children submissive and respectful in every way- for if someone does not know how to manage his own household, how can he take care of God's church? He must not be a recent convert, or he may be puffed up with conceit and fall into the condemnation of the devil. Moreover, he must be well thought of by outsiders, so that he may not fall into disgrace and the snare of the devil."


What would possess people to act like that?  How could they think that what the Bible has to say about qualities for a bishop would be something to laugh about?  Like I said, I guess you had to be there...

It wasn't long after I began my ministry as a young Episcopal curate that I was involved pretty closely in an election for a new bishop.  I was supporting the candidacy of my rector, and I was given the privilege of putting his name in nomination.  It was a solemn and very formal occasion.  In the eucharistic service before the meeting of Convention we listened carefully to God's Word.  When the nominations were made, the speeches included not only facts about the man's ministry (there were only men being nominated in those days), but most of us made the effort to relate the qualities of our candidate to the scriptural references about bishops.  Granted, that was almost thirty-five years ago.  But have things changed that drastically in that short a time?  Apparently so.


Things like this only point out more strongly the importance of what Pope Benedict is doing with Anglicanorum coetibus.    Although they weren't in evidence at the gathering in St. Matthew's, Portland, there are still good people, Bible-believing people, in the Episcopal Church.  And there are even more in the wider world of Anglicanism.  Right now, these people are "strangers in a strange land."  They need to know there's a place for them to go, and there's a real pastor who cares for them.  I know many of them have some anti-catholic feelings to come to terms with.  This isn't their fault.  They're the product of generations of otherwise good people who have feelings of distrust, of deep suspicion, when it comes to things catholic.  The very thought of "becoming Roman" isn't seen as a pleasant possibility.  I know this.  I was in that position myself.

But God can change hearts, and He very often does.  Benedict has opened the door and put out the welcome mat.  Those of us already in the Catholic Church need to have patience as our Anglican brothers and sisters assess the situation and begin to wrap their minds around the idea of making the journey "to Rome."

Part of the beauty of Anglicanorum coetibus is that when these Anglicans arrive home, they'll find it furnished with what they already treasure.  They'll be welcomed as brothers and sisters in Christ.  And they can be darned sure they won't be mocked for believing God's Word.