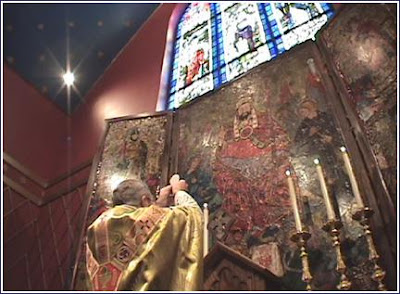 The newspapers and email in-boxes were filled yesterday with the news that the Anglican Bishop of Chichester had decided to become a Catholic, and would accept the Holy Father's offer which will be outlined in the upcoming Apostolic Constitution.

I had listened to the recording of Bishop Hind speaking at the Forward in Faith Assembly, and I didn't hear him say that.  But then I thought, "Maybe I missed it."  So I listened again.  No luck the second time, either.

He has posted this statement on his diocesan website:

An article has been published today in the Sunday Telegraph asserting that I have announced that I am about to become a Roman Catholic.

This is not the case.

The report appears to come from a misunderstanding of an answer I gave to questions from the floor at the recent ‘Forward in Faith’ assembly, at which I spoke.

A questioner had asked about the Papal condemnation of Anglican Orders. I responded by speaking about the subtlety of the position. I referred to the moment when it seemed as if the issue of how the Roman Catholic Church sees Anglican orders might be reopened but how the ordination of women to the priesthood and other developments have now made that impossible.

This is clearly a contentious and complex issue and one where it is easy to misunderstand the nuances of the debate. I think I made my position clear in my address at the Forward in Faith assembly. The text is available below and a podcast may be found on the Forward in Faith website.

Text of the Bishop's talk.


It would be a marvellous example if a bishop like John Hind, respected by those who consider themselves Anglo-catholics, took this important step.  For now, it's not happening.  And that's all right.  Better for him and others like him to take time to consider this prayerfully.  Just as it's not good for a person to get married in order to escape from an unhappy home, so it's not good to make this kind of important decision simply because things are falling apart where he is at the present time.  The Holy Father's offer is an open offer.  There's no time limit.  And the Holy Spirit -- the Spirit of Truth -- is always active in open hearts and minds.
Posted by Fr. Christopher George Phillips at 9:56 PM