That certainly clears things up... 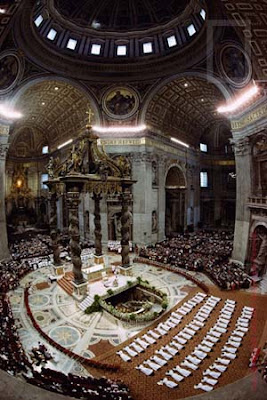 I'm grateful that the clarification has come from the Holy See, concerning the issue of celibate clergy in the Anglican Ordinariates.  Lots of ink and energy were being taken up by this, and it has caused unneccessary confusion among Catholics and Anglicans alike.  In fact, this one issue (a rather minor one, when considering the whole matter of the Ordinariates) was threatening to become the only thing concerning the Apostolic Constitution being talked about.

I think a great deal of the confusion came because of statements made by John Hepworth, the archbishop for the Traditional Anglican Communion, when he was being interviewed by "The Australian," a newspaper in his native country.  Here's the first mention:


Inquirer: How do the Pope's proposals mesh the Latin celibate discipline for all clergy with Anglicanism's longstanding acceptance of married priests and bishops?

JH: Bishops in the new Anglican structure will be unmarried. This is out of respect for the tradition of Eastern and Western Christianity. But priests who come from Anglicanism will be able to serve as priests in the new structure, whether married or not, after satisfying certain requirements. The truly radical element is that married men will be able to be ordained priests in the Anglican structure indefinitely into the future. It is anticipated that Anglican bishops who are married when they joined the new structure will still be able to serve as priestly ordinaries, exercising some of the responsibilities of bishops.


Then the issue is brought up a second time:


Inquirer: Critics who insist on seeing the Pope as God's rottweiler will be hard pressed to explain the fact that he is prepared to create a parallel jurisdiction with married Catholic priests. Even more surprisingly, the option won't just extend to the present crop of married men in Anglican orders, which most observers expected, but to future generations of clergy.

JH: The Anglican tradition has had married clergy for 500 years. It has a long experience of having a clerical family at the heart of the parish. Apart from Ireland, it was only with the expansion of the British Empire that the situation arose where married Anglican clergy worked in the same place as celibate Catholic clergy. The two traditions will continue to live side by side. Indeed, it would be hard to imagine how an Anglican tradition within Catholicism could sustain itself in the long term without married clergy. Permitting it is not in any way intended as a challenge to the rule of celibacy, but it is allowing the vision of a family at the heart of the parish to flourish at a time when the family is under great stress. On the other hand, Anglican Catholics are going to have to relearn the value of the celibate vocation. The TAC already has a number of celibate bishops and celibate communities of priests and nuns, so perhaps the lesson has begun to be learned.


When I first read this interview on October 24th, it seemed odd to me.  I didn't think there had been any indication that the Holy See was considering a change in the discipline that presently governs the Pastoral Provision; namely, those Anglican clerics already married would be considered for a dispensation from celibacy, and those who are unmarried would take a vow of celibacy.  Additionally, any future candidates for priestly ministry would be celibate men, and if a married man is widowed, he may not remarry.  This always seemed to us to be a reasonable and pastoral solution.  But when I read the interview with John Hepworth, I was very surprised at his understanding of what was now being offered by Rome.  I commented to several people that it didn't sound accurate, but perhaps he knew something we didn't know.

As it turns out, he was indeed mistaken.  I can't imagine where he got the idea that future candidates for the priesthood could be married men.  If he thought the Apostolic Constitution was going to apply the discipline of the Eastern Rites to Anglicans, that was a very large and imaginative leap indeed.  We're not from an Eastern heritage; we're Latin Rite Catholics.  Canterbury traces its roots to Rome, not Constantinople.

Anyway, I'm glad it's cleared up.  Now we can get on with more productive discussions about the upcoming Apostolic Constitution.