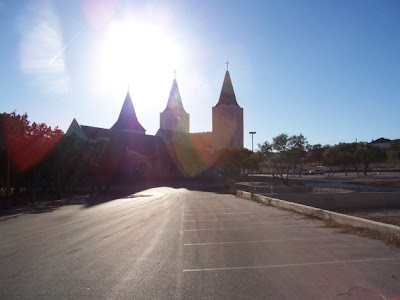 What a day it's been.  I'm still trying to get my mind around just how historic and consequential this Apostolic Constitution will be.  I've had lots of calls, emails and visits.  I've talked with the media, with other Anglican Use clergy, and with many parishioners.  There's plenty of excitement, and lots of questions.  Nothing can be answered in any definitive way until the Apostolic Constitution is promulgated.  Of course, that doesn't stop any of us from trying to figure it all out, right?

I've been asked how this idea of a Personal Ordinariate is different from what we already have in the Pastoral Provision.  Here's an imperfect analogy: it's kind of like the difference between living in an apartment and living in a house.  What do I mean?  As things are now, we have a wonderful home in the Catholic Church.  We have a beautiful liturgy.  We have a marvellous church and school.  We have a terrific archbishop who readily expresses his respect and affection for us.  We're extremely fortunate.  That's not the case in many other dioceses.  There are bishops who have made it clear that they don't want an Anglican Use parish in their jurisdiction, and there have been many cases where requests have been flatly refused.  Many chancery officials view the Pastoral Provision as being temporary, and will do very little to assist Anglican clergy and they completely ignore the inquiries of Anglican laity.  As it is now, the Anglican Use depends upon the charity of the local ordinary.  That's a very shaky foundation for building anything permanent.  A landlord can eventually get rid of an unwanted tenant.  A home-owner has a whole lot more stability.

When an Ordinariate is erected, it becomes (in every important way) like a diocese, with its own prelate, its own clergy and its own laity.  As a juridical person, it owns property.  While there must be cooperation with other bishops, the existence of the parishes of the Ordinariate won't depend on someone else's permission or good will. The prelate will determine when a new outreach should take place, and where a parish should be erected.  The training and ordination of clergy will be coordinated within the Ordinariate, and their assignments will be directed by the prelate.  All this contributes to a stability and permanence which will lead to further growth and effectiveness.

Some people have asked, "What about our beautiful liturgy?  Will that change?"  Actually, it probably will -- and for the better.  The present Book of Divine Worship, while it's a thing of beauty and is far more than we expected at the time, isn't completely satisfactory.  The liturgical politics of twenty-five years ago meant that we were required to "novus ordo-ize" parts of the Mass.  Too much was incorporated from the 1979 Prayer Book, which is not the version most of us knew and loved.  Many of us had come from what were called "Missal parishes," where we used things like the Anglican Missal, the English Missal, or the Knott Missal.  These were beautiful expressions of the traditional Catholic Mass, in impeccable English, incorporating the Prayer Book along with traditional and ancient Catholic elements.  Many of the Anglicans who will enter the Church through the Personal Ordinariates come from those same kind of parishes, and will be looking for that kind of liturgy.  The Book of Divine Worship serves us well, but it needs to be amplified and improved.  It's my hope that this will happen now.

We'll know lots more when the Apostolic Constitution is promulgated.  How long before that happens, we don't know.  But the Holy Father won't take more time than is necessary.  Until then, we'll keep talking and asking questions and filling the space with what we think might happen.

The whole thing is just fantastic, and quite honestly, I never thought I'd live to see this day.  Deo gratias.
Posted by Fr. Christopher George Phillips at 10:02 PM