Forward in Faith? Forward to Rome. 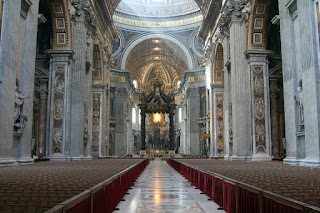 The National Assembly of Forward in Faith is meeting in London.  This group is comprised mostly of those who would consider themselves Anglo-catholic, and it's a presence in several provinces in the Anglican Communion.  The galvanizing issue for them is the ordination of women.  Obviously, they're against it.  Of course, there are other issues that concern them, and they tend to be fairly traditional on things like the liturgy, their understanding of sacraments and ecclesiology.  It was formed in 1992 and is really an amalgamation of several different catholic-minded groups within Anglicanism.  Many, of not most of the members would have reunion with Rome fairly high on their agenda.  Knowing that about them, I thought it would be really interesting to listen to the speakers, and they have the audio presentations available.  You can listen to them at their website.

Frankly, I was disappointed.  Yes, they called the news from Rome "historic."  They acknowledged that some people might be interested in the Personal Ordinariates.  But most of their talk was about derailing the push towards having women bishops in the Church of England, and protecting their place as Anglo-catholics.  They wanted to see what Rome was really offering, to see if it would be a better deal than they could get in the Church of England.  They were disappointed because they want "corporate reunion" between Anglicans and Rome -- although how they think there could be anything like that when they can't even get along among themselves, I do not know.  I mean, the Holy Father did everything except somersaults, and these people are still shopping around for the best deal?  I think some of them were surprised that in order to be part of an Ordinariate, they'd actually be expected to become Roman Catholics.

I don't mean to sound negative.  I have no doubt that there is a goodly number of serious-minded Anglicans who will prayerfully and gratefully grasp the Holy Father's outstretched hand.  I think the Ordinariates will be built slowly, which is no doubt the best way.  I liken it to the very gentle snowstorms I remember from my childhood in New England, which would start with a slight dusting of flakes on the ground and then slowly, slowly building up until everything was completely covered and sparkling white.  The Ordinariates will be provided as they're needed, until they spread out wider and wider, and I believe more and more people will come to the realization that their real spiritual home is to be found in full communion with the See of Peter.  That, along with the inevitable and natural growth of our existing parishes, means that the future of our beautiful patrimony is secure.

England, and by extension, all of Anglicanism is Mary's dowry.  Since we belong to our Lady in a special way, we know her deepest wish is to have her whole dowry back in the Catholic Church as it was established by her Divine Son.  At the end of the 14th century, the Archbishop of Canterbury, Thomas Arundel, wrote to his bishops, "The contemplation of the great mystery of the Incarnation has drawn all Christian nations to venerate her from whom came the first beginnings of our redemption. But we English, being the servants of her special inheritance and her own dowry, as we are commonly called, ought to surpass others in the fervour of our praises and devotions."  And now, finally, at the beginning of the 21st century, Pope Benedict XVI is helping to bring that very thing to pass.
Posted by Fr. Christopher George Phillips at 10:19 PM