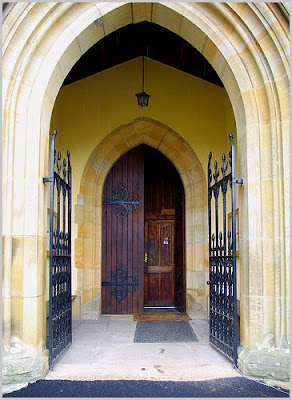 The newspaper headline screams, "Episcopal bishop opens door to Catholics" and it gets your attention. The Episcopal bishop of Maryland gives the reminder that "the door swings both ways." Yes, the All Saints Sisters of the Poor just entered the Catholic Church, but the bishop proudly claims that he's taken in three Catholic priests over the past months. Tit for tat, you win a few you lose a few.

What the bishop neglects to mention is that the vast majority, if not virtually every case of a Catholic deciding to become Episcopalian is because of the search for a church that will make fewer demands or give approval to something that is unacceptable for Catholics. I've never met an Episcopal priest who was formerly a Catholic priest who hadn't made the switch because he got married (usually after an illicit relationship with someone before actually leaving the active Catholic priesthood). Certainly the married state is an honorable one -- unless that person is already bound by the vow of celibacy. Most of the Episcopal laity I've known, who tell me "I used to be Catholic," are divorced and remarried -- even multiple times.