Anticipated by a hundred years... 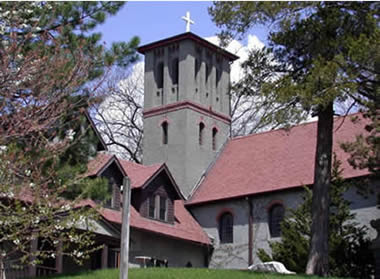 With all the talk about Anglican conversions -- who? how many? where? -- let's not forget a very important conversion anniversary which took place on 30 October 1909.  On that day Fr. Paul Wattson, Mother Lurana White, and fifteen others (including friars, sisters and laity) were received corporately into the Catholic Church.  Originally founded as a Franciscan community within the Episcopal Church, the Graymoor Friars and Sisters were, as Fr. Paul said, "the first-fruits of our prayer for unity."  The previous year they had begun what was then called the Church Unity Octave, afterwards renamed the Octave of Prayer for Christian Unity.

The Graymoor story is a fascinating one, and is especially precious to us in this parish.  The patronal title we took, Our Lady of the Atonement, is a title of the Blessed Mother with its origin at Graymoor.  During their lifetime, Fr. Paul and Mother Lurana could not have imagined that the day would come when the Holy Father would open the doors so generously to Anglicans.  But surely the coming of this day was assisted by their heavenly prayers, and we should all be grateful for their pioneering example.

So, to the Graymor Franciscan Friars and Sisters of the Atonement: Happy Anniversary!
Posted by Fr. Christopher George Phillips at 5:18 PM