The origin of the wood of the Cross... 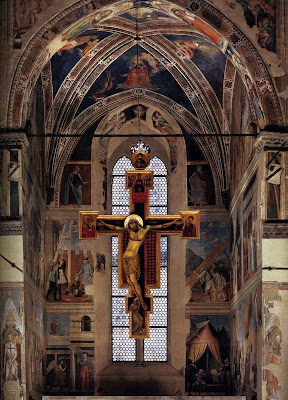 ...according to The Golden Legend:

And Adam lived after he had begotten Seth eight hundred years, and engendered sons and daughters. Some hold opinion thirty sons and thirty daughters, and some fifty of that one and fifty of that other. We find no certainty of them in the Bible. But all the days of Adam living here in earth amount to the sum of nine hundred and thirty years. And in the end of his life when he should die, it is said, but of none authority, that he sent Seth his son into Paradise for to fetch the oil of mercy, where he received certain grains of the fruit of the tree of mercy by an angel.

And when he came again he found his father Adam yet alive and told him what he had done.

And then Adam laughed first and then died. And then he laid the grains or kernels under his father's tongue and buried him in the vale of Hebron; and out of his mouth grew three trees of the three grains, of which trees the cross that our Lord suffered his passion on was made, by virtue of which he gat very mercy, and was brought out of darkness into very light of heaven. To the which he bring us that liveth and reigneth God, world without end.
Posted by Fr. Christopher George Phillips at 11:53 AM