More than remembering on 9/11 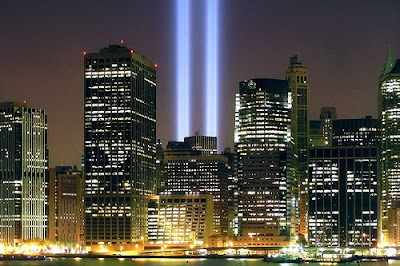 This Friday will be (can this possibly be correct?) the eighth anniversary of the horror of the attack on our country. It's important that we mark the occasion not only with dignity, but also with determination that we will continue to fight the evil which lashed out on that day.

The Catholic schools of the archdiocese were all asked to have some sort of special remembrance on the anniversary, and a number of suggestions were sent out to all school administrators. I'm glad that the schools were encouraged to do something, and at the Academy we will do what the Church has done for centuries. At 9:15 a.m. on Friday, a Latin Requiem Mass (Ordinary Form) will be offered for the repose of the souls of those who lost their lives on that day eight years ago.
There'll be various prayer services and meaningful ceremonies taking place throughout our nation. There will be gatherings and important words spoken in memory of those who died. Everyone will mark the day in his own way. But our remembrance will be more than just remembering. We'll be offering the Holy Sacrifice of the Mass, that which was commanded by Christ Himself, for the benefit of the departed.
Posted by Fr. Christopher George Phillips at 9:43 PM