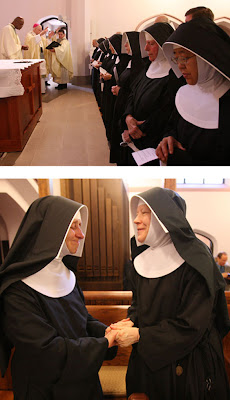 Earlier today, on this Feast of St. Gregory the Great, ten All Saints Sisters of the Poor and their chaplain were received into the Catholic Church by the Archbishop of Baltimore. Here's the press release from the archdiocesan website:

Archbishop Edwin F. O’Brien, Archbishop of Baltimore, announced today that 10 nuns, formerly members of an Episcopal religious community known as the Society of the All Saints’ Sisters of the Poor, and the group’s chaplain, Fr. Warren Tanghe, were received into full communion with the Roman Catholic Church at a Mass earlier today.

The sisters, who contacted the Archdiocese last year to investigate the possibility of entering into full communion with the Catholic Church after a seven-year period of discernment, will continue to reside in their convent in Catonsville, where the Order has been located since 1917. The nuns first arrived in Baltimore in 1872.

The sisters have expressed to the Archbishop a desire for the community, which has served the poor in the Baltimore area for over 135 years, to continue, now as a Catholic religious institute.

“The Catholic Church has been serving the needs of the people of the Archdiocese of Baltimore for over 200 years and our many communities of consecrated religious have been invaluable partners in this effort,” the Archbishop said. “Our Archdiocese and our Church’s mission of caring for the poor are now greatly enriched for having the All Saints’ Sisters among us.”

Two nuns from the religious community have decided not to leave the Episcopal Church and will continue to reside with their now-Roman Catholic sisters.

“The spiritual well-being of all of the All Saints’ Sisters is our priority and we will do everything we can to support those who have entered into full communion with the Catholic Church as well as the two sisters who remain Anglican,” Archbishop O’Brien said.

More than 120 people attended the Mass celebrated by Archbishop O’Brien at the chapel of the Sisters’ Catonsville convent.

“Time and again, apostles and saints have been led by God into unexpected paths; so too with us—the All Saints’ Sisters of the Poor,” Reverend Mother Christina, Mother Superior, said. “As they responded with faith and trust, we also are responding to God’s call, and are looking forward to seeing His will for us unfold as we enter the Roman Catholic Church.”

The Bishop of the Episcopal Diocese of Maryland, the Rt. Rev. Eugene T. Sutton, said, “In meeting with the Sisters, I’ve been impressed with depth of their prayer and the pace of their discernment. I wish them God’s blessings as their journey takes them into the Roman Catholic Church. Despite the sadness we feel in having to say farewell, our mutual joy is that we remain as one spiritual family of faith, one body in Christ.”

Chaplain to the All Saints’ Sisters, Fr. Warren Tanghe also entered into full communion with the Catholic Church today and is discerning the possibility of future formation and ordination as a Roman Catholic priest.
Posted by Fr. Christopher George Phillips at 2:08 PM