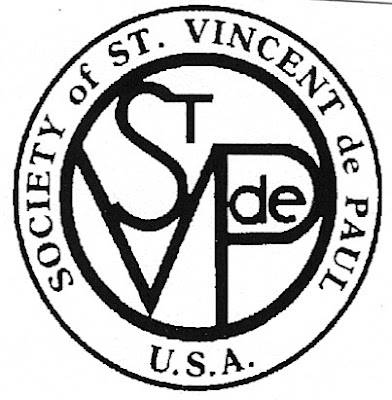 Over the past several weeks there has been great confusion about the stance of the St. Vincent de Paul Society on health care reform. There was an "action alert" sent out from the national office of SVdP, telling members to urge their congressmen to support health care reform. Apparently the intention was not what came across in the wording of the alert. It sounded like we were supposed to express support for the current plan under discussion -- which would be difficult, since it's convoluted and confusing, and aspects of it are contrary to moral teaching. A completely separate issue is the whole matter of paying for the buffet of pork that it seems to be, and whether it's moral to bankrupt our nation.

A clarification has come from the national office of the St. Vincent de Paul Society. Here it is -- and I really do wish they'd said this in the first place.

The controversy surrounding the reports of the National Society of St. Vincent de Paul supporting health care reform which includes federal funding of abortion continues. Let me assure you, nothing could be further from the truth. The intent of our legislative action alert, referenced in the media activity, was to urge our membership to ask their congressional representatives to support essential health care reform that is consistent with the teachings of our Catholic faith.

As our vision statement reminds us… “Because Vincentians are friends in Christ, it will be said as in the Acts of the Apostles, the community of believers was of one heart and mind. This charism draws to the Society people of all backgrounds, races, ethnic groups, and ages, particularly the young. Because of these strengths, the Society of St. Vincent de Paul in the United States is the most powerful voice in the world for alleviating the suffering of the poor and bringing justice to the poor here in this country and throughout the world.”

It is important that you as leaders of the Society insure that our position on health care reform is communicated to the members of your Councils and Conferences emphasizing that the National Council does not support any legislation which would contradict traditional Catholic values.

Yours in St. Vincent and Blessed Frédéric,