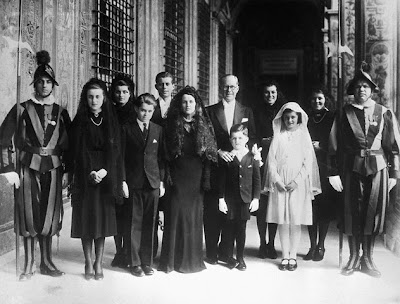 It was newsworthy when the President of the United States was asked to hand-deliver a senator’s letter to the Pope – a letter not from just any senator, but from Senator Edward M. Kennedy. The Holy Father quite rightly didn’t reveal its contents, which made me hope it contained specific expressions of sorrow and contrition for the battle which the senator waged against innocent human life for more than three decades. Repentance for such public sin would be far better if it had been offered publicly, but alas – there was no repentance forthcoming for the senator’s leadership in the support for wide accessibility to abortion, unless it was in some other part of the letter not revealed.

It was Cardinal McCarrick who read excerpts from the letter at the time of the burial of Senator Kennedy, and it would be unimaginable that he would leave out such a statement of repentance if there was one, since he quoted a few words from the senator which expressed his imperfection.

Here is what Cardinal McCarrick read:

"Most Holy Father I asked President Obama to personally hand deliver this letter to you. As a man of deep faith himself, he understands how important my Roman Catholic faith is to me, and I am so deeply grateful to him. I hope this letter finds you in good health. I pray that you have all of God's blessings as you lead our church and inspire our world during these challenging times. I am writing with deep humility to ask that you pray for me as my own health declines.

"I was diagnosed with brain cancer more than a year ago and although I continue treatment, the disease is taking its toll on me. I am 77 years old and preparing for the next passage of life. I have been blessed to be part of a wonderful family and both of my parents, particularly my mother, kept our Catholic faith at the center of our lives. That gift of faith has sustained and nurtured and provides solace to me in the darkest hours. I know that I have been an imperfect human being, but with the help of my faith I have tried to right my path. I want you to know Your Holiness that in my nearly 50 years of elective office I have done my best to champion the rights of the poor and open doors of economic opportunity. I have worked to welcome the immigrant, to fight discrimination and expand access to health care and education. I have opposed the death penalty and fought to end war.

"Those are the issues that have motivated me and have been the focus of my work as a United States senator. I also want you to know that even though I am ill, I am committed to do everything I can to achieve access to health care for everyone in my country. This has been the political cause of my life. I believe in a conscience protection for Catholics in the health field and I will continue to advocate for it as my colleagues in the Senate and I work to develop an overall national health policy that guarantees health care for everyone. I have always tried to be a faithful Catholic, Your Holiness, and though I have fallen short through human failings, I have never failed to believe and respect the fundamental teachings of my faith. I continue to pray for God's blessings on you and on our church and would be most thankful for your prayers for me."

Certainly, no one of goodwill would wish the senator any eternal ill, and the Holy Father’s response, although general, is in keeping with what most of us would say: an expression of regret for Senator Kennedy’s physical condition and the assurance of prayer.

However, as a final act of contrition, the senator’s letter falls far short. Even a child making his first confession knows that a sincere and specific facing of one’s sinfulness is required. Repentance isn’t a recounting of the good one has done; rather, it involves facing squarely the wrong one has done. There’s none of that here, other than the general and gentle statement that “I know that I have been an imperfect human being…” Instead, the senator’s letter is a litany of his good works. It’s almost as though the senator was reminding the Holy Father of what he should include in any future public letter of condolence.

It all strikes me as so self-serving, right to the end. And I couldn’t help but recall our Lord’s parable of the two men, one a Pharisee and the other a publican, going up to the temple. The Pharisee prayed, “I thank thee, Lord, that I am not like other men…”

Of course, I pray that Senator Kennedy, before he died, repented of the evil he did. I wouldn’t wish him or anyone else eternal damnation. But I am glad that he’s no longer able to carry on as he had been, making the world an unjust and dangerous place for innocent human life.
Posted by Fr. Christopher George Phillips at 11:54 AM