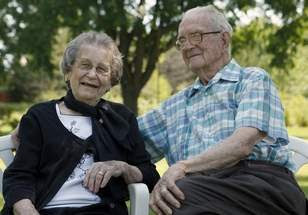 A beautiful story from Cincinnati...

It was a small ceremony attended by only a few family members and friends. They gathered on a Tuesday in the priest's parlor at St. Boniface in Northside and listened to a young couple recite their wedding vows.

To have and to hold, from this day forward...

"They wouldn't let us in church," recalls the former Thelma Wiesman, who was the bride that day. Walter Shroyer, the groom, wasn't Catholic, although he later converted.

They're sitting on the patio of their buff brick home in Colerain Township, enjoying a summer breeze and eyeing Walter's large garden in the distance. Its dozens of tomato plants are beginning to produce plump, juicy fruit.

Walter thinks back to the fall of 1933. He was working part-time as a waiter at the Graystone Ballroom in Music Hall when he spotted an auburn-haired hat-check girl. Thelma.

"I think I fell in love with her the minute I saw her," he says. "I asked to take her home one night. She agreed. I think she thought I had a car. But I didn't, so I had to take her home (to Northside) on a street car."

They had few luxuries. The nation was mired in the depths of the Depression.

Unemployment in Cincinnati was at 30 percent. By 1934, the year the Shroyers married, unemployment was 25 percent and only 62 percent of local workers had full-time jobs.

For richer, for poorer...

Relatives treated the newlyweds to dinner on their wedding night. The family then gathered and quaffed a keg of beer.

The next morning, "I went to the grocery store a half square up," Walter says, "and bought two eggs, 5 cents apiece, and brought 'em home for our breakfast."

Their first home was a third-floor, two-room apartment in Northside. Rent was $10 a month. "But we didn't have any heat. When cold weather started coming, we had to move out," Walter says. They found a place for $13 a month, heat included.

Walter eventually got a job at Formica. He was a senior account representative when he retired in 1978. For years, he also supplemented the family income by working Saturdays at a nursery.

For better, for worse...

Thelma says the happiest days of her married life were when she welcomed their children into the world. The couple had four: Walter Jr., Mary Lou, Margie and Jane. Perhaps the saddest day was when they lost one. Margie was 48 years old when one of her sons came home and found her in a chair, dead of an aneurysm.

It happened 20 years ago, but Thelma's eyes water and her voice cracks when she thinks about it.

"You're not supposed to outlive your children," she says quietly.

In sickness or in health...

Three years ago in October, Thelma suffered a heart attack.

"The doctors told us to say our goodbyes because she wasn't going to make it through the night," daughter Jane Frey says.

The three adult children gathered outside Thelma's intensive care room with their father.

"That's just about the worst feeling a person can have," Walter says. "All I could do was just visually, mentally, pray that it wasn't going to happen."

Morning arrived, and Thelma's heart was still beating. She received a pacemaker, and was home for Christmas.

"They didn't want me up there," Thelma says, referring to heaven.

To love and to cherish, till death do us part...

Walter says their "policy" since Day 1 of their marriage has been: "If we had a problem between us, everything was solved and forgotten by the time we went to bed." "And," Thelma says, "he never goes to bed without kissing me."

And hereto I pledge you my faithfulness.

Walter won't deny that, on occasion, he has "looked at a pretty girl when she walked by."

But, "Neither of us ever cheated," he says. "That just has to happen once and that could spoil the whole rest of your life. But I know it never happened."

"Oh my goodness, no," Thelma adds.

Then Walter blurts out: "I could never figure out how she could put up with me for 75 years."

Says Thelma: "I guess I just loved him."

Walter thinks about that, as if searching for another way to express how they've lived out their wedding vows the past three-quarters-of-a-century, before finally agreeing with his wife. "It's nothing but just love," he says.
Posted by Fr. Christopher George Phillips at 9:29 PM