I don't recall that particular Mystery... 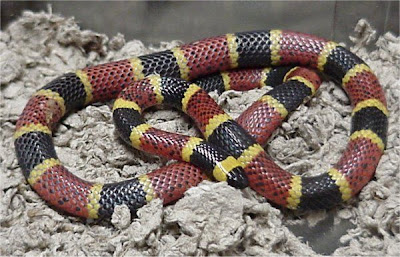 With triple-digit temperatures and a drought that won't seem to end, the wildlife around here is on a constant search for water and shade...

SAN ANTONIO, Texas -- Father James Galvin has served at Mission San Juan de Capistrano for 11 years. In that time he's seen plenty of coral snakes in his rectory and even inside the church.

On Sunday, a woman in line to take communion spotted what she thought was a rosary; instead it was a colorful coral snake. The woman threw the snake and caused quite a scare.

Despite the scare, no one was hurt.

As for the snake in the church, a greeter took care of it and threw it outside. The coral snake was about a foot long.

Father Galvin said keeps at least five cats around, including two in the house, to alert him when a snake sneaks in.

I imagine the conversation over Sunday lunch at that lady's house covered more than the weather and Father's sermon...
Posted by Fr. Christopher George Phillips at 4:12 PM