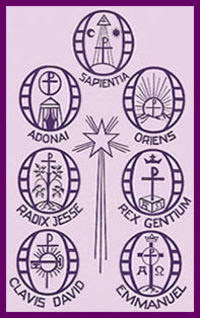 Today is the first day of Late Advent, and we begin the great “O Antiphons,” which lead up to the Vigil of the Nativity. Each antiphon highlights a title for the Messiah: O Sapientia (O Wisdom), O Adonai (O Lord), O Radix Jesse (O Root of Jesse), O Clavis David (O Key of David), O Oriens (O Rising Sun), O Rex Gentium (O King of the Nations), and O Emmanuel, and they are taken from the prophecy of Isaiah concerning the coming of the Messiah.

The order of the antiphons isn't accidental. If we work backwards, beginning with the last title and take the first letter of each antiphon -- Emmanuel, Rex, Oriens, Clavis, Radix, Adonai, Sapientia -- the Latin words ero cras are formed, meaning, “Tomorrow, I will come.” The Lord Jesus, whose coming we have prepared for in Advent and to whom we refer in these seven Messianic titles, tells us: “Tomorrow, I will come.”
Posted by Fr. Christopher George Phillips at 1:35 PM