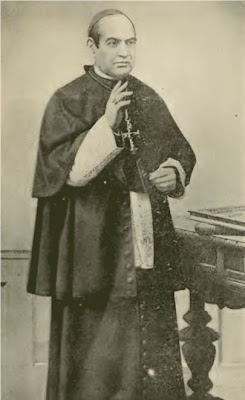 Known as the "spiritual father of Cuba," St. Anthony Mary Claret was a missionary, a religious founder, a social reformer, Chaplain to the Queen of Spain, a writer and publisher, and an archbishop. Born in Spain, his work took him to the Canary Islands, Cuba, Madrid, Paris and he was one of the Fathers of the First Vatican Council.

As a young man he worked as a weaver in the textile mills of Barcelona, and he was always looking for ways to improve himself. He learned Latin, and he also learned the printing trade – two things he would use during his ministry. He was ordained at the age of 28, but ill-health prevented him from entering religious life as he thought he wanted to, as a Carthusian or as a Jesuit, but nonetheless, he went on to become one of Spain’s most dynamic and well-known preachers.

He spent 10 years giving popular missions and retreats, always placing great emphasis on the Eucharist and devotion to the Immaculate Heart of Mary. Then at the age of 42, beginning with five young priests, he founded a religious institute of missionaries, known today as the Claretians. In fact, after his death, a group of his Claretians eventually came to San Antonio where they served in San Fernando Cathedral, and also continue to staff the parish of the Immaculate Heart of Mary.

St. Anthony Mary Claret was appointed to be the archbishop of Santiago in Cuba, which had been very much neglected by previous archbishops. The Catholic faith was at a low point there when he arrived. He began to reform things by almost constantly preaching and hearing confessions. He became hated because he told men and women that they needed to marry, rather than just live together, and he was also hated because he gave Catholic instruction to the many black slaves in the area. In fact, his enemies even hired an assassin who tried to stab him to death, and when he failed, St. Anthony forgave him, and managed to get the death sentence commuted to a prison term. Many of the Cubans were living in poverty, and he encouraged family-owned farms which could produce a variety of foods for the family’s own needs and for the market. This made enemies out of the large sugar crop owners, who depended on the poor to work in the fields for them at very low pay.

He eventually returned to Spain to do a job he didn’t like — that of being chaplain for the queen, but in the revolution of 1868, he fled with the rest of the royal court to Paris, where he preached to the Spanish colony. All his life Anthony was interested in the Catholic press. He founded the Religious Publishing House, a major Catholic publishing venture in Spain, and wrote or published 200 books and pamphlets.

At the First Vatican Council, he was a staunch defender of the doctrine of infallibility, and he won the admiration of his fellow bishops. Cardinal Gibbons of Baltimore remarked of him, "There goes a true saint." At the age of 63, he died in exile near the border of Spain.

O God, who for the evangelization of peoples didst strengthen the Bishop Saint Anthony Mary Claret with admirable charity and long-suffering: grant, through his intercession; that, seeking the things that are thine, we may earnestly devote ourselves to winning our brethren for Christ; who liveth and reigneth with thee, in the unity of the Holy Spirit, ever one God, world without end. Amen.