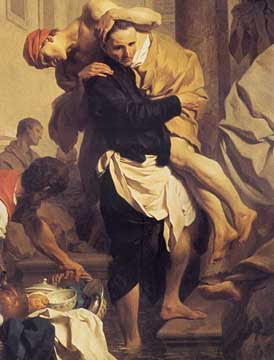 St. Camillus is the patron saint of hospitals, hospital workers and those who are sick. Here is his story, excerpted from The Church's Year of Grace, by Pius Parsch.

St. Camillus' mother was nearly sixty years old when he was born in 1550. As a youth he gave himself to the sinful pleasures of this world. His conversion dates from the feast of the Purification, 1575. Two attempts to enter the Capuchin Order were frustrated by an incurable sore on his leg. In Rome St. Camillus was received in a hospital for incurables; before long he was put in charge because of his ability and zeal for virtue. He brought to the sick every imaginable kind of spiritual and bodily aid.

At the age of thirty-two he began studying for Holy Orders and was not ashamed of being numbered with children. After ordination to the holy priesthood he founded a congregation of Regular Clerics, the "Ministers to the Sick." As a fourth vow the community assumed the duty of caring for the plague-ridden at the risk of their lives. With invincible patience Camillus persevered day and night in the service of the sick, performing the meanest of duties. His love shone forth most brightly when the city of Rome was stricken by epidemic and famine, and when the plague raged at Nola. Having suffered five different maladies, which he called God's mercy, he died in Rome at the age of sixty-five. On his lips was the prayer for the dying: "May the face of Christ Jesus shine gloriously upon you." Pope Leo XIII declared him the heavenly patron of hospitals and added his name in the litany for the dying.


O Almighty God, who hast compassed us about with so great a cloud of witnesses: Grant that we, encouraged by the good example of thy servant St. Camillus, may persevere in running the race that is set before us, until at length, through thy mercy, we may with him attain to thine eternal joy; through Jesus Christ, the author and perfecter of our faith, who liveth and reigneth with thee and the Holy Spirit, one God, for ever and ever. Amen.
Posted by Fr. Christopher George Phillips at 3:26 PM