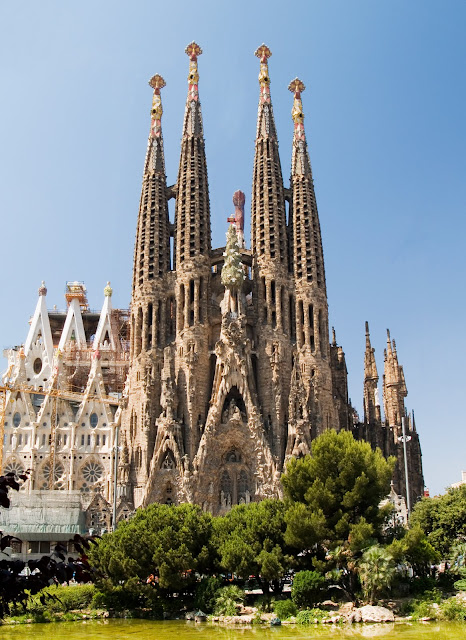 Templo Expiatorio de la Sagrada Familia in Barcelona is one of the great architectural wonders of the world.  Still under construction, it is the crowning achievement of Antoni Gaudi (1852–1926), a truly devout Catholic known as "God's architect."  The Holy Father will be visiting Sagrada Familia in November to celebrate the opening of a portion of the interior of this remarkable building.  The following interview appears on the Zenit website.

The Pontiff will visit Santiago de Compostela on Nov. 6 for the Jacobeo Holy Year, and go to Barcelona the next day to consecrate the religious monument that has been declared patrimony of humanity. Construction on the church began in 1882, and it is expected to be completed by 2026. A portion of the building's interior, however, is set to be opened this year.

In this interview with ZENIT, Rigol explains the details of the preparation for the papal visit, as well as the construction of a train tunnel near the church that could threaten the structure.

ZENIT: What is the significance of Benedict XVI's visit to the church?

Rigol: For us this signifies an ecclesial dimension seeing from the highest point of its representation, which is the Pope, and above all it indicates the universal projection of the Holy Family in the Christian realm.

The message of the Holy Family, through architecture and culture, is a transcendent message: a call to universal fraternity.

This central message of Christianity -- of treating all persons as brothers and sisters -- should at the same time be projected to persons that do not have this sense of faith, but who also feel solidaristic in universal fraternity.

The Pope's coming confirms this message at the world level from the cultural and artistic point of view, especially the call to universal fraternity.

ZENIT: How are you preparing for this event?

Rigol: First, we are now completing the interior of the church, which follows the guidelines and definition that Gaudi made of the interior; he left a very precise model of how he saw the interior.

Probably at the end of July everything will be ready to await the coming of the Pope on Nov. 7, so much from the material point of view.

In addition, we are appealing to Christians to receive the Pope. The archbishop of the diocese and the commission he has created are in charge of this aspect.

Because the coming of the Pope is not centered solely and exclusively on the Holy Family, but is also a meeting of Christians that live in Barcelona, in Catalonia and in Spain.

A trip of this kind has its organizational complexities and all of us are working intensely on this.

ZENIT: Do you know what authorities will be present at the ceremony of the blessing of the church?

Rigol: We are being given information on this, but still at a somewhat formal level. The official information will come at the appointed time, which I estimate will be in September.

The monarchs of Spain have already announced their intention to be at the Sagrada Familia Church, and we know it is the desire of the government of Spain and of the authorities of Catalonia. What cannot be specified is the exact name of the persons who will attend.

ZENIT: How many people do you expect that day in the Holy Family Church and its surroundings?

Rigol: I am not able to give these figures yet. However, inside the church there is room for between 7,500 and 8,500 people, depending on the degree of security that we give at the entrances and exists, which must be the highest.

Around the church there will be a device so that people will be able to follow the ceremony from the surroundings of the building.

We don't know how many people can come, but we are preparing for many.

We are organizing it so that those who wish to follow the ceremony up close can be placed in the best possible position.

There is a building very close to the church's main facade, but there are also two very large squares and an intersection of important avenues, so that there is considerable space for people.

ZENIT: At what stage are the work on Sagrada Familia?

Rigol: There will be some details to be attended to in the interior, because the works create dust. In this connection, we have reserved August to do some things, such as getting the organ ready, which must be done at a time when nothing is being built inside because silence is needed.

Once the interior is finished and the church is open for its specific functions, the building of the Holy Family will continue according to Gaudi's plan, and this could take between 15 to 20 years.

Yet to be built are the towers of the evangelists, the main tower, which will be 172 meters (564 feet) high and the four buildings of the nave, one on each side, where the sacristies and chapels of the Most Blessed Sacrament will be located. This is a project for the future generation.

ZENIT: In what way is the construction of a tunnel near the church, through which a high-speed train will pass, affecting or might affect the structure?

Rigol: We have technical studies of very qualified people that state that the AVE's project entails risks, mainly in two great areas.

First, the basement of the Holy Family is a geologically complicated terrain, and a transformation of the terrain could be generated that in the long run might mean a very significant movement for Gaudi's project, which is one of great litheness and height.

Second, the vibrations that might be transported and that on reaching 172 meters height might mean a risk.

Given the risk of this project, we have thought of two possibilities: In the first place, to try to speak with the administration, but we have not been able to agree on what we consider a risk. 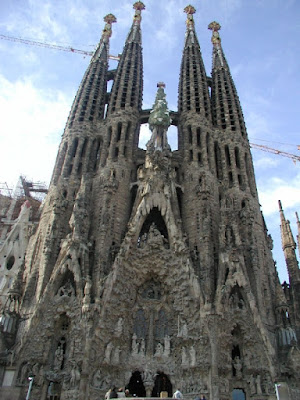 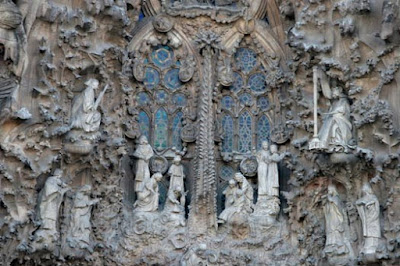