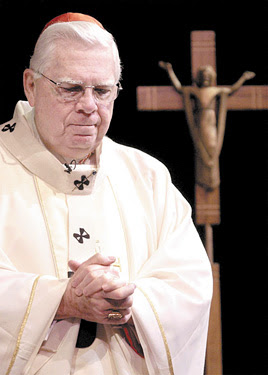 Although it's not a paper I have any desire to read with regularity, the National Catholic Reporter has a very good story about Cardinal Bernard Law, written by John Allen. It gives a glimpse of his life as Archpriest at the Basilica of St. Mary Major, and weaves the obligatory discussion of the Boston scandals throughout. But overall, it shows a picture of a man who has come to terms with his present place in the Church, and who has the blessing of a deepened relationship with Christ.

I usually manage to visit him when I'm in Rome, and our relationship goes back more than twenty-five years, when I was going through the process of the Pastoral Provision. He also visited our parish on the occasion of our tenth anniversary and stayed with us for a few days. My family got to know him a bit, and he never fails to ask about them whenever I see him. I think he asks because he's interested, and not just to make conversation.
There are many who say he hasn't paid a high enough price for what he did or failed to do, but I know he has paid something. And he has gained something. To speak to him now is to speak to a man who has an air of authentic humility about him. There's a kindness there, which wasn't so evident before. As nightmarish as the Boston scandals were, and as neglectful as it appears he was, I think the Cardinal has come out of it as a holier man.

Anyway, I enourage you to read the article.
Posted by Fr. Christopher George Phillips at 11:44 AM